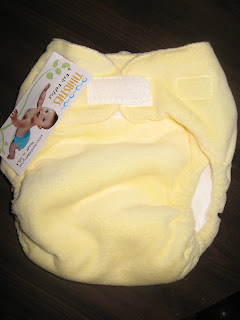 This is the first fitted I purchased. Its a size large Thirsties fab fitted. Thirsties now makes a DUO fitted diaper which I haven't seen yet but would really like to try out. The fab Fitted has a soft velor material on the outside and has fleece lining the inside of it. This is a sized fitted. I think there are some pros and cons to this. Because its sized its going to be to big or to small at some point. I purchased it with the intention of using it on my toddler but found it to be kind of big for him. He probably would have been better off in a medium. He is growing into it but because he is so skinny it has a tendency to fall down some while he is in it. It does work well though and can hold a good mount of pee. Here he is playing and running around in it. 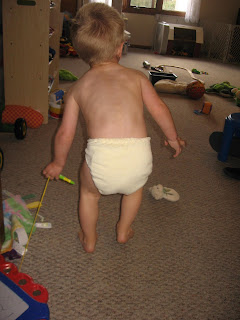 I have also put this size large on my little (chunky) guy. He was probably 8 months old when I took this picture, can't remember for sure but it was before he was crawling so not as active. It seemed to have a pretty good fit on him as well but if he was more active it probably would have fallen off him to. You can see that the tabs are crossed completely over as far as they can do. But he is pretty small to be wearing a size large fitted. 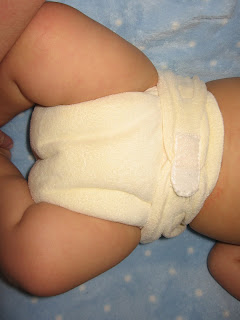 This fitted does give some bulk but most fitted do as they contain a lot of material to absorb liquid. 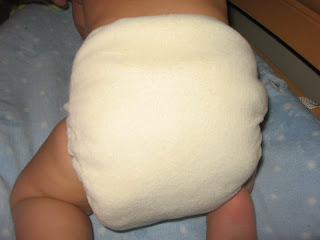 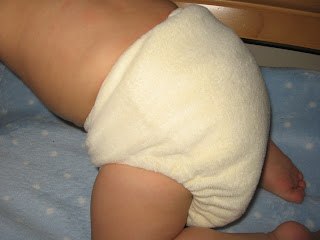 I am pretty happy with my Thirsties Fab Fitted diaper. I do think that I would like it better if it was in snaps rather than velcro. It holds a fairly good amount of pee. I haven't had any issues with it becoming worn looking and falling apart. These run around $17 for a Duo Fitted so not the cheapest route as far as fitteds go but they work well and dry fast.
Posted by Kristina at 2:05 PM

I recently ordered some of the duo fitteds in snaps and I highly recommend them! So far, they fit great and hold quite a bit of liquid.

I loooooooved these. I used them on my babe when he was a newborn. I was sad to see them discontinued but I may get around to trying the new duos soon.