Fluffy Monkey Butts is a a company started by a 2 mom team in the suburbs of Chicago. They specialize in making cloth diapers. I had the oppertunity to try out one of their fitted diapers. I was able to choose my own print (from their current inventory of fabrics). They had a lot of cute choices and they get new prints in often.

Here is the fitted diaper I received. Its a cute baseball print and is lined on the inside with a soft red minky fabric. Their diapers are made with 4 layers of super absorbency materials including micro-fiber and terry and have flannel on the outside and minky on the inside against baby's bum.
The pattern they have is nice and simple and easy to use. 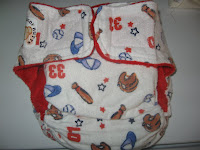 They incorporated a laundry tab on their diaper. 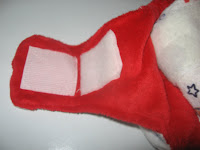 I love the bright red of the minky inside of my diaper I received. In this picture you can see a line of stitching going straight up the middle. This is nice and will help to keep the inside layers of material from bunching up in the wash. There is also a nice section of elastic around the legs. 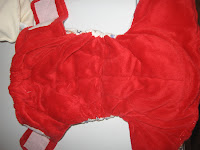 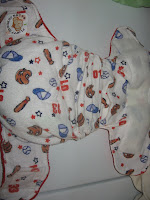 I picked a medium for my diaper. It seemed to fit pretty good on my boys. A little big maybe but one you got the cover on it worked just fine. I did let my toddler run around in it for a while with out a cover because he likes to play 'nakey' and it helps for his bum to be able to air out a little while with out a cover. The minky on the inside of the diaper is really nice and soft. I also like that the poo actually comes off pretty easy from the minky. The Fluffy Monkey Butts diaper does seem a bit bulkier than my other fitted diapers but that doesn't really seem to bother me to much. This fitted did a good job holding in the pee. I don't think I have had any leak issues with this. The cost for their fitted diaper is $17.00.
Posted by Kristina at 6:29 PM

Hi Kristina, I'd like to put this in my roundup for next week, but there's no ending date. :-)

Thanks for some more information on fitteds.

Thanks for the review and giveaway!

I forgot to put my info in the last box when i entered, so entered again. can you delete the first one please? thanks!

When does this giveaway end?

Thanks for the chance.