I seen in one of the comments for the Radius tooth brush giveaway a question about how to help encourage teeth brushing in young children who hate to brush. I guess I an pretty lucky in that my son loves to brush his teeth. We usually have to take the brush from him and take him out of the bathroom crying! But on to the question asked: 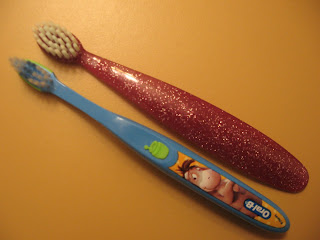 First I would like to say, I am by no means an expert. With that said, if you have a child who doesn't like to brush their teeth there are some different things you can try.
-Take your little one to the store and let them pick out a tooth brush of their own. I think that when they are able to pick something out by themselves they feel pretty proud and will be more likely to use it. Just make sure you have the right stage brush for your child.
-Make brushing fun. Allow your child to take lead. Let them play with, chew on, and explore the brush. Its a new thing, you move it all over in your mouth, it feels funny, what the craziness is that thing? I think it helps to let the child to explore what the item is. The more familiar they are the more comfortable they will be sticking it in their mouth.
-Teach them. Use your tooth brush and show them how you brush your teeth. Front circles, side circles, tops, bottoms, how ever you brush show them. Let them try it out too!

Here is my experience with my son:
We started brushing my sons teeth shortly after he got his first couple in. He was probably around 9 months. I think most people don't think to brush at that age because they are so little and because they only eat so much. I think this helped with my son liking to brush teeth.

Once E was old enough we let him have to own brush to explore. He was able to chew on it, brush with it, play with it so that it became more of a good item rather than an item that was considered bad. We still would help him with brushing by holding his hand, not the brush, and showing him how to move the brush around and on his teeth getting the spots needed. 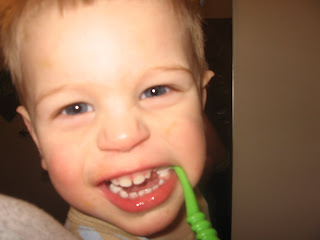 Shortly before E turned 2 he started asking a lot of different times to brush. He would hear my husband turn the water on in the bathroom and would run in there asking to brush his teeth.

We would play a fun 'game' with him and ask him to brush in different spots, like the top, front, bottoms, sides etc and he would do it. We also do a copy game where we will brush our own teeth and he will watch and do the same motions.

E loves to brush and will sit on the counter for forever if we let him brushing his teeth. He is still only 2 though and still needs helping making sure he gets all his teeth clean. That is why we have 2-3 tooth brushes just for him. He picks out the brush he wants and uses it. After a minute or two we pick up a different brush of his and help him. He usually does a pretty good time opening his mouth but every now and again he will keep it closed a little bit, I think because it tickles. 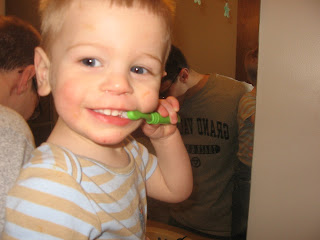 We have his first dentist appointment coming up on the 6th. This should be a really interesting experience. He is such a strong willed child and when something is going on that he is unsure of he fights and screams and kicks and you usually have to sit on his legs or hold him in a super tight hug to get him to calm down. I hope that he does well but I doubt it. I might make my hubby take the afternoon off to go with.

We probably would have waited until E was 3 to take him into the dentist but on Dec. 23 he fell in the tub and hit his face on the side. This resulted in a chipped tooth, really badly bruised gums and I think the teeth got pushed up a little bit. Of couse nothing was open from when it happened until the 27th because of the holiday and we had a recheck for his ears on Tuesday so I asked the Pediatrician about it and she recommending taking him in to get it checked out. She also said that she recommends they start seeing a dentist around 2 - 2 1/2 years old. So off we go to the dentist! I will have to let you know what happens, they might need to sand down the chipped tooth to smooth it out.

Ok, my daughter LOVED teeth brushing from the start, no problems at all, and she LOVED the dentist, we have a great kids dentist out here who is fantastic. My son... well, he hated it from the start. Like screaming, sometimes so badly I'd have to hold his head still, and since he had to take pediasure for his weight, I wanted to make sure those little teeth got brushed. It took 6 months of brushing, letting him play with his brush, singing the Raffie "Brush your teeth" song, and watching mommy/daddy/sister brushing. Then one day, he just decided he liked it. Now at brushing time he sings the song all the way up the stairs. He no longer fights. And his first trip to the dentist was at 1. Our insurance company really pushed it. I figure, it's covered, might as well get him used to it. And they were nice enough to let him get his teeth all cleaned while laying on my lap, and on the TV's we brought He-man and they put it in for him. So instead of caring that people he didn't know were messing with his mouth he was excited to tell them that he saw He-Man.

My boy loves to brush his teeth and would all day if you let him :)

I just learn through the entire article of yours and it was fairly very good. That is an excellent write-up many thanks for sharing this informative facts. I will visit your website regularly for some latest publish.
oakville dentistry

You made some good points there. I did a search on the topic and some related sub topics and I have found a lot of corresponding views.
best dentist in oakville

Very nice article, thanks for sharing the information

I can only express a word of thanks. Because with the content on this blog I can add knowledge I, thank has been sharing this information. Do not forget to visit our website to share information and knowledge about health.
khasiat dan kegunaan walatra habbaza
khasiat walatra habbaza softgel
Hopefully, sustenance will be easy and simplified in all matters :-)
DISTRIBUTOR QNC JELLY GAMAT
Agen jelly gamat QnC cibeureum tasikmalaya
obat gondongan alami