GoGoNatural sent me a 'mystery' diaper to review. They had just gotten in a new diaper to their store, yet to be released and they asked if I could review it for them. I didn't know what the diaper was until I got it in the mail. It was a DinkleDooz. It was something I had never heard of but I am willing to try anything. It went in the wash and was ready to go! I got a cute green color. 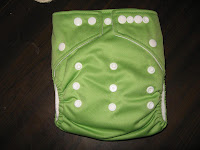 As you can see in the picture below this diaper is not in short supply of snaps. But don't worry, the snaps are super easy to figure out and use. I typically like a snap diaper to only have 4 snaps because of the easiness factor. This diaper has 6 snaps on it. On each side there is a thigh snap to adjust the thigh tightness and then there are 4 waist snaps. This diaper comes with cross over tabs which is great. It has three rows of snaps for adjusting the rise of this diaper. 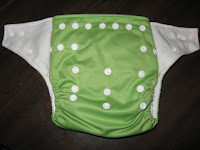 The diaper came with 2 microfiber inserts. A large and a small. 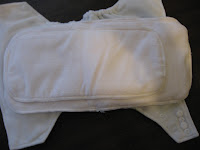 This diaper had the pocket opening in the back which is nice. The pocket is at the very top of the diaper and has a fold over flap that tucks into the pocket to hold the inserts as well as keeps the microfiber covered if the top layer of fleece were to dip down a little bit. 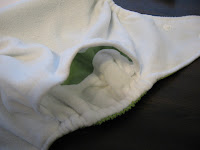 Here is the diaper on my 20 pound 8 month old. I have it on the middle rise setting and the tabs as tight as they go without crossing over. 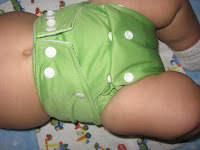 The back of the diaper has a nice fit and the elastic across the back is great. 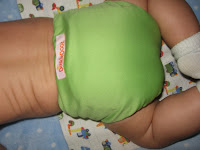 Here is the diaper with both inserts inside. It is bulky, but not to bad. 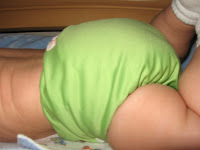 -This was a new diaper, one I had never heard of so I wasn't sure what to expect. I put it on my son with just the large insert and he was in it for about 4 hours and no leaking. I had put him in it then went shopping and came home and he had fallen asleep so he was in it a while in different positions and no issues. When I went to change him after his nap I seen that he still had that on and I was very impressed.
-This diaper has so many features that I love:
-After using this diaper for a few days I decided to try it out as a night time diaper. My son's wetting habits had changed as well as how he sleeps...on his belly. So my diapering systems that I had for him and were working kind of stopped being so great. So I figured it wouldn't hurt to try. I put both inserts into this diaper and put him in it for night. After about 13 hours of sleep he was a teeny tiny bit damp so the next night (after washing of course) I added in a small hemp insert and he was completely dry! We have been using this as our over night diaper since then with out hardly ever having a damp baby in the morning.
-I find that between the rise adjustment and the thigh adjustment I can get a great fit around my baby's chubby thighs which helps reduce the chances of the diaper leaking.
-One thing about this diaper that I have found to be a problem is that my hubby doesn't like it. I found it laying on top of the changing table and asked him why it was there and he said it was to confusing. I guess the extra thigh snaps along with the 4 waist snaps was to much for him! Oh well, I'm going to keep using it!

Would you like to buy a DinkleDooz Diaper? Right now GoGoNatural has them on sale for $12.56! This is cheaper than getting a diaper cover! And SO WORTH THE MONEY!

**This review is entirely of my own opinion. I was not paid to do this review. My experiences may differ from yours. I received one Dinkledooz diaper to use and review from GoGoNatural**