Our Journey with Cloth

I would like you all to welcome Terra to Cloth Diaper Addiction. She is our new blog contributor! She has some great experience under her belt and is so fun to work with. I am pleased to have her on board!

When we were expecting our first son, Keaton, my husband suggested a great way to save money - cloth diapers. I am pretty certain I laughed in his face and said there was no way was I putting something that ‘gross’ in my washer. I stuck to my guns until about 6 months after our son was born and we started discussing how we could be saving more money. My husband again mentioned cloth diapers. Once again, I said, “no way!” But, then I hesitated and said, “Well, maybe I would...if we had two in diapers....” About six weeks later, we discovered we would indeed have two in diapers! I talked with a few friends, researched my little heart out and a friend even mailed me two diapers from her stash to keep so we could see for ourselves how awesome they really were!

Around Christmas of 2007, we began our cloth diapering journey, with just a days’ worth of diapers, but quickly built our stash so I could go approximately two days between washes. I felt so much better about the materials I was putting next to my sons’ skin as opposed to those in disposable diapers, and my husband was loving the money saved. 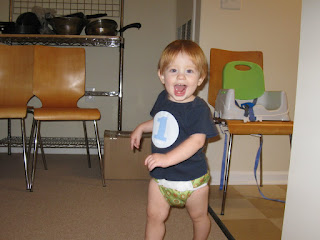 Keaton, 15 months, in a Bummis Super Whisper Wrap cover (most likely, over a Thirsties Fab Fitted, as that was our only fitted at the time).

We welcomed our second son into the world in August of 2008, and started him in cloth the day we came home from the hospital. When he was about 3 months old, I realized it was kind of silly that we were washing diapers and saving money there, but still shelling out money for wipes. We finally bought some cloth wipes and I couldn’t believe we had waited so long to make that switch! 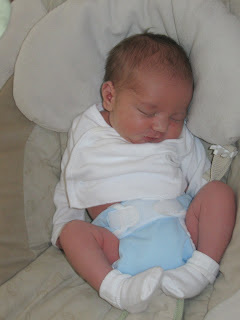 Benjamin, about a week old, in a Thirsties Pocket All-In-One

By this point, I was very comfortable with cloth, and we were enjoying experimenting with trying various kinds and brands of diapers. The only kind of diaper we had not tried was prefolds. They simply terrified me for some odd reason.

In December of 2009, we learned that baby #3 was on the way. A friend offered to sell us her newborn and small stash for a fraction of the cost of what she paid and, of course, we jumped on that offer! I was nervous when she informed me that the stash consisted mainly of prefolds and covers, but, was determined to figure out this prefold thing! Caedmon arrived in August 2010 and we quickly found out that we loved prefolds - I couldn’t believe that I had put off using them. We also used more fitteds on Caedmon than we had with the other boys (whereas with them, we used mostly pockets and AIOs). 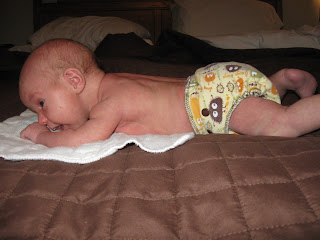 Caedmon, about 2 weeks old, in a Nifty Nappy fitted

It's been nearly 3 years and my husband is so glad that I eventually came around and agreed to cloth diapering our children, primarily for the financial aspect. Meanwhile, I am so glad that I have stuck with it as I have learned more about the products that make up disposable diapers and the affects they have on our bodies and earth. We are also very thankful that our family has been so supportive of our desire to cloth diaper our children and they have helped us in numerous ways to purchase the diapers we need, as well as being willing to change the boys and their cloth diapers. My hope is that our boys will see cloth diapers as the norm, and when they grow up and have children, make the decision to cloth diaper them as well (maybe even with diapers they wore!)

In combination with diamond rings, all these different watches currently have comfortable strains plus attractive mummy with omega replica sale pill calls. Usually there are some several layouts out there. Several of the facial looks will be game as well as others are usually more square in aspect. A further preferred group is a Girls Timeless Sport activity. In lieu of diamond rings, all these types currently have yellow metal. Current hexagonal scenarios plus two-tone rolex replica sale stainless steel/gold wristbands generate all these different watches quite a stylish glance. The 2 main metals will be interwoven by using characterized mid one-way links. A paintball guns plus possession are usually yellow metal. Time frame is definitely readable for a white colored call by using yellow metal indices. Gals who seem to have a preference for chronographs could be curious about a Brasilia set, utilizing their vivid plus artsy layouts. They may have present day appearances as compared to a lot of Ebel different watches. A wrist strap deviate; quite a few will be rubberized as well as some will be stainless-steel. As a consequence of massive Roman numbers plus lustrous possession, on the internet look into the time frame. A 1911 set is made up of collection agencies to get tag heuer replica sale persons either. A set known as hence honoring 12 months a make was well-known. A it will be possible 1911 styles are apt to have dark colored wrist strap plus frequently dark colored and also white colored calls. A girls 1911 types currently have stainless-steel wristbands plus scenarios, plus magic hands on your white colored call.