Made in the Red Barn Review

As I mentioned yesterday, I recently made the switch to a (nearly) paperless kitchen. The key ingredient in a paperless kitchen is having cloth towels, or "unpaper towels" within easy reach. Here is my set up: 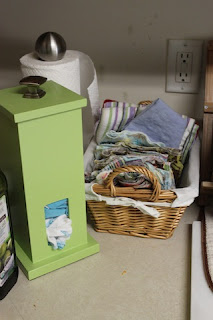 I wanted to support a WAHM/D/F (mom/dad/family) when purchasing my unpaper towels and kept seeing Made in the Red Barn on Etsy. I originally found them because of their unpaper towels, but in browsing their shop, I discovered their Towel House for those unpaper towels. I found a Green Apple one to match my rugs (brown/lime green) and fell in love! 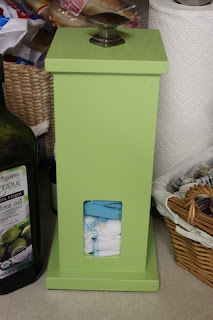 It seems the older I get, the more obscure the gifts I ask for on birthdays and holidays: I begged for a Towel House and unpaper towels for my birthday. I was thrilled to receive the Apple Green towel house and 2 dozen unpaper towels - a dozen white and a dozen Caribbean Blue.

The unpaper towels are made from birdseye flats, are prewashed, and get softer and more absorbent as you wash them. The colors are so rich and vibrant (this picture does no justice). 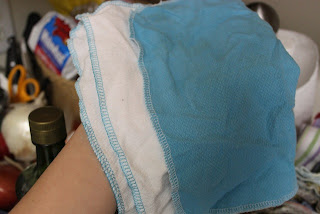 The towel house was no where near as large as I expected (which is a good thing!) It holds 2 dozen unpaper towels and is a perfect addition to my counter top. I have tried flannel napkins in the towel house, but the birdseye cotton napkins definitely work better. Some great things about the towel house - you don't have to fold the napkins, just stuff them in (this is where my big boys come in. Keaton gets the white towels and Benjamin gets the blue and as I sort through the towel laundry, I toss a towel to them and they stuff my towel house for me!) 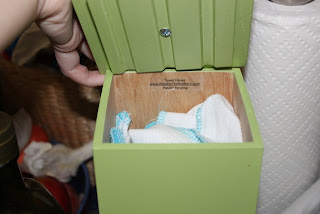 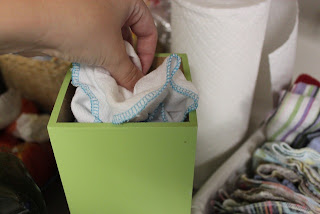 The unpaper towels pull out easily from the bottom as you need them. 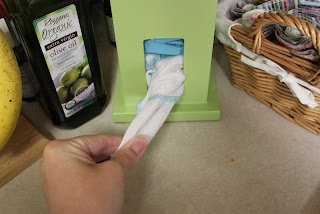 While I still have a basket with a dozen folded flannel napkins right next to the Towel House, I find myself reaching for the Made in the Red Barn towels more frequently. 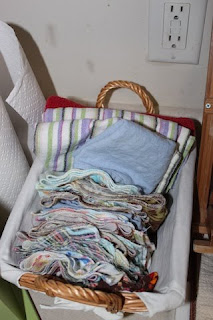 Disclaimer: I received 2 dozen unpaper towels and a Towel House from Made in the Red Barn as a gift for my birthday. I was not compensated in any way for this review and all opinions are my own.
Posted by Unknown at 8:00 AM

I LOVE the idea of the towel house. I'm certain my napkins would be too thick to fit nicely in it at this point.. I might put that on a wish list though!

@Jen - my flannel ones, which are thicker than the Birdseye flats from Made in the Red Barn, fit well, I just couldn't put as many in (w/ the Birdseye, I can get 2 dozen tightly crammed in. The flannel, a little over a dozen, "loosely packed" lol) :) It's a cute addition that helps esp if you are lacking in counter space!

The MITRB towel house hass been in my etsy faves FOREVER! LOVE THEM! I actually contacted them last year to see if I could review, but they responded asking a little more then never replied again. I assumed they were insulted by me "asking for free stuff." LOL.