Last weekend, we celebrated my oldest son's 4th birthday. We decided to do a Lego theme, which was risky because he'd never even seen a Lego before, but we were planning on him acquiring some for his birthday. I didn't want to do the typical 'store-pack' themed items, not really our style. What I did want was fun and color!

I typed up "Happy 4th Birthday Keaton" on white card stock in a Lego font that I found for free. I cut out the words and then traced around them onto construction paper (had I thought of this project sooner, I would have done it all on card stock, but my original banner failed me about 36 hours before party time, haha). I cut out the traced objects a bit bigger so that the original white words had a bubble of color around them and then taped them onto sheets of black construction paper. I then used a 3-hole punch to make holes on the top of the black pieces of construction paper and used black yard to string it. We then hung it across the kitchen, much to the excitement of the birthday boy! 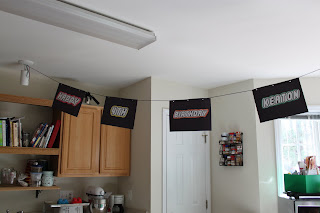 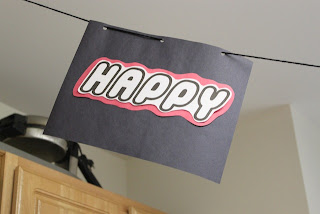 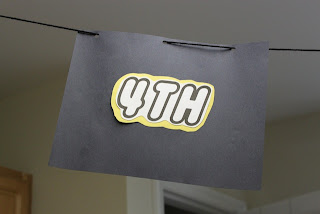 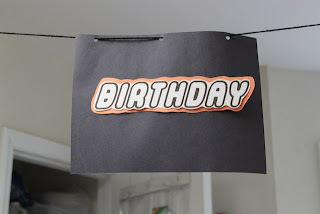 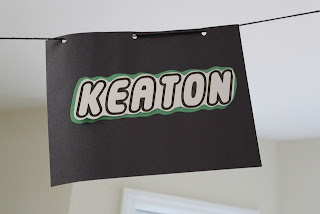 Next was the cake. This was the first time I had ever done anything to a cake other than frost it while it was still sitting in its 9x13 dish. It's not perfect, but it was fun, a great conversation piece and definitely yummy! I originally saw this tutorial on Betty Crocker's website and referenced it again for the party. I ended up making 2 cakes because we were planning on having a slew of people for the party, but, because we all had the seasonal crud, we closed it to family only. I confess to having a HUGE sweet tooth, and really, while I had planned for each person to have one small rectangle (as in a small piece with two marshmallow tops), having just one marshmallow top was probably more than enough. With a frosting covered half of marshmallow on top, this cake gets super sweet, super fast!

I had no idea what to do for a base for the cakes to sit on, so I took a priority mail box, taped orange construction paper on it and covered that with wax paper! Couldn't have worked out better! 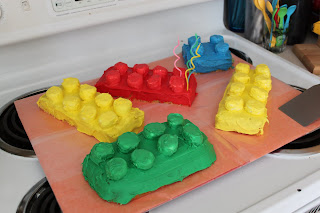 Before the party, my lego-lovin' hubby made the 'centerpiece' - the little cabin with canoe guy. I had anticipated it being a lot larger than it was, more like a true centerpiece, but, it ended up working out perfectly once all the food, utensils, etc... were on the table. When Keaton woke up from his nap, we let him open a gift (a small lego set) and he and his daddy got to work on building his first creation, a dump truck! He was so excited to place that on the table next to Zach's creation for the party! 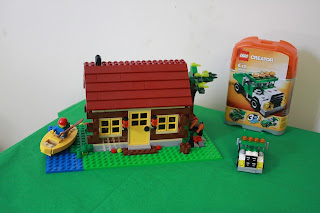 I remembered the 'yearly' shirt I like for the boys to have...on Friday morning (his party was Saturday afternoon!) Thanks to an amazing friend around the corner from us, she lent me the supplies and I got to work right after Keaton went to bed and got his shirt made: 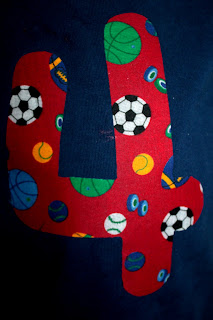 The other things that didn't get photographed: 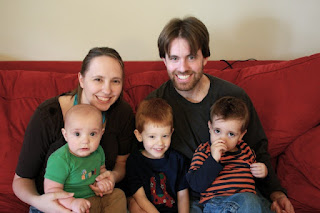 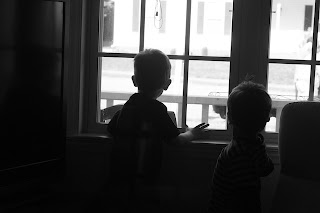 The big boys waiting for family to arrive
The cake was a hit! 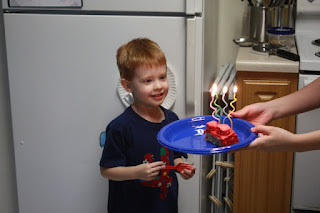 And it made for a birthday that I hope he remembers for awhile! 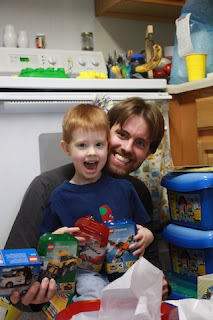 Today is big man's real birthday! Happy 4th birthday to you, Keaton.
My sweet pea who made me a mama!
Posted by Unknown at 8:26 AM

I just started following and I'm so excited! We're going to cloth diaper our baby who is due in July and is a BOY! I love finding other boy moms :)

BTW, this party looks SUPER fun and I'm pretty sure if my husband saw these pictures he'd want me to make a lego cake for his next birthday :)

Haha! My hubby reminded me that he DOES have a birthday coming up and the cake WAS really cool ;-) You should totally go for it :-D

Thanks for following CDA!

what an adorable party idea!!!!!The cake looks great!!!!Our little man turned one this past week but he is sick with pneumonia so we postponed his party but I got him a John Deere cake.