Finding a detergent that is safe for cloth diapers is work in itself. You want to protect your wonderfully built stash and not have to worry about using a detergent that is going to ruin your diapers. I have problems finding detergents that are good for me to use because my toddler breaks out in major rashes from certain brands. So when I was contacted by Selestial Soap to review a couple of their products I was rather hesitant. Number one, I didn't want to worry about my diapers getting ruined because of a bad detergent. Number two, I really really didn't want my son's poor bottom to turn into a tomato! I decided to give it a try and do the review.

They sent me their new product called Soft Bottoms. This is a detergent that is 100% natural. It is safe and gentle on baby's extra sensitive skin. There are no dyes, scents or brighteners, it is super concentrated, hypo allergenic, deep cleaning, leaves no residue, non toxic, no surfactants, and is non-sudsing. Plus its CLOTH DIAPER friendly! This comes in an 8 ounce bottle that will do 10 loads of laundry/diapers. 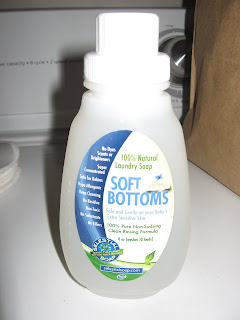 The other product they sent me was their Selestial Sun. This is a natural bleach alternative made with water and hydrogen peroxide. This is also diaper friendly. There are no dyes, fragrances, non-toxic, no phosphates, no optical brighteners, no chlorine bleach, degradable and is not tested on animals. 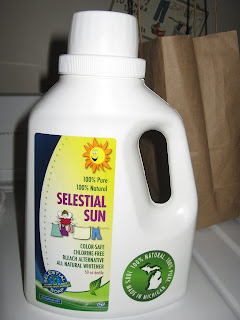 What did I think?

Over all this worked pretty well with washing my diapers. I did notice after a couple of washes that my diapers were smelling sort of funny. I like to give products that I am reviewing a good time frame before making any judgements on performance. That is why I continued to use the Soft Bottoms detergent. The smell did disappear after that one washing. I' m not sure if it was just the other detergents that I had used coming out that was causing the smell or what but it did go away and that was all that mattered. Stinky diapers are not fun at all. Another thing with the Soft Bottoms detergent was that I didn't notice much as far as my son's skin acting up because of this detergent. His bottom did not turn into a bright red tomato! Woohoo!

The Selestial Sun that I was sent is a nice alternative to bleach. I can honestly say that I have NEVER used bleach on my diapers...I think in the almost 5 years that my hubby and I have been married I have never even purchased bleach. I don't like the smell of it, I don't like that if you get on little drip on your cloths they are going to end up with white spots all over them and its not the safest thing to have around. So having the Selestial Sun to use (especially in the winter) was nice. You just add a little bit to each load of diapers to help keep them from getting major dark stains.
Posted by Kristina at 3:14 PM

Do you mind if I quote a few of your posts as long as I provide
credit and sources back to your weblog? My website is in the very same niche as yours and my visitors would truly benefit
from some of the information you provide here. Please let me
know if this okay with you. Regards!

Feel free to surf to my web blog :: sexygirlchat.net