I love to try out new diapers. Especially when they turn out to be great diapers. I found Charlie Banana one day while scouring the web and had to check them out. I was lucky enough to be given the chance to do a review (and giveaway) with them.

I got my package right before Christmas so I washed them and wrapped them and then put them under the tree....I can't believe I did that! That meant I had to WAIT to use them! Silly me. 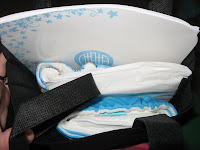 I received a cute little black tote bag that contained a folder full of information about Charlie Banana, 2 disposable liners, and 2 diapers. 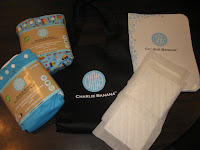 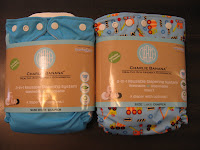 The disposable inserts were nice and soft and have a quilted look to them. This was my first exposure to disposable inserts. They reminded me of the big hospital pads you use after having a baby. (My hubby even asked if that was what they were when he seen them. HAHA) They fit very nice into the cover and you tuck the end of the insert under the fleece pocket flap to hold it in place. Its hard to get a good idea of how these work long term when you only have to but for me they worked pretty well. The first one was wet. I found that the fleece of the diaper shell was wet so I had to let it dry before using it again for the second disposable insert. If the poo that ends on this is fairly solid I don't think you would have problems with it getting onto the shell of the diaper making it unusable with out washing first. If you have a runny poo I think it would go off the insert and onto the fleece requiring a washing. 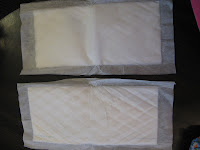 Here is a view of the diaper. The pocket opening at the bottom of the photo. I like that the inserts have nice blue tags on them so that I know I'm putting the right inserts into the right shells. Also, super soft fleece! The pocket of the diaper is at the front. This is nice for when baby is poopy but sometimes its nice to have the opening in the back because when you have a boy the front of the insert is usually drenched and the back is dry. The diapers are easy to stuff and the pocket has a nice fold over flap to keep the insert inside. 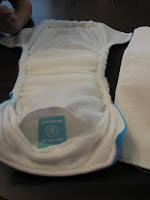 My little E-man was so excited to get the Under Construction print! He took it and started looking it over right away. 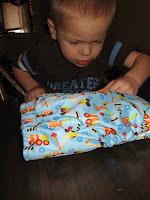 Here goes blogger driving me crazy again doing its weird turn the photo any way it wants to thing. The Charlie Banana diapers feature snaps. There is one row that goes all across the top of the diaper for waist adjustment. Then there are two rows, one on each side for leg adjustment. Isn't that blue so pretty? 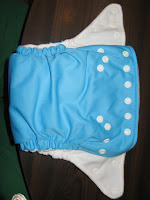 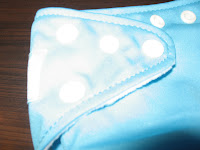 Here is the Medium diaper on top of the Large diaper showing some size comparison. The large is wider across the top back and it is also longer. 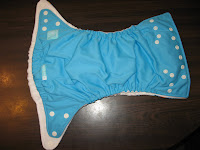 Here is a close up of the Under Construction print. Adorable but my camera does not do justice to the real colors. 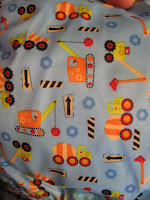 So now that we have enjoyed looking at the wonderful features of this diaper you probably want to hear about my experience!


Here is the medium diaper on my 8 month old, 20 pounder. As you can see it has a nice fit. I snap the leg snaps first then do the waist. He is chunky enough where I can do the leg snaps on the second or third setting depending on what I have stuffed in the pocket. I don't need to use the cross over tabs but have the waist snapped as close as possible without using them. The waist has two snaps on each wing which helps with wing droop. 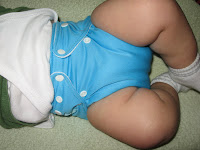 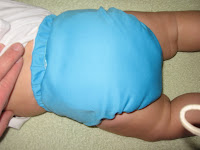 I used this diaper with one and two inserts. (Each diaper comes with two inserts). This picture I had just one of the inserts in and its not bulky at all. Even with two of thier inserts stuffed inside the bulk wasn't to bad. 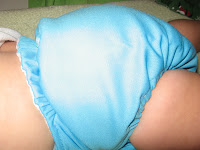 I was brave and did try this as an overnight diaper. I put both inserts in and crossed my fingers hat I wouldn't have extra laundry in the morning. When we got up everything was nice and dry! Both of my boys are belly sleepers to which creates and even higher risk for leaking out the tummy area but these seemed to hold up well.

Overall I am really pleased with these diapers. They are soft, wash up great, the stitching seems like it will last and the build of the diaper is great. It offers a lot of neat and helpful features as well. I would really like to try this diaper out in a one size. The OS uses elastic leg adjustments.

I did use both sizes of diapers on both boys and you can really tell a difference in fit. The large on my younger boy I needed the cross over tabs as tight as they went as well as the thigh snaps as tight as they went. I was still able to slip my finger into the leg and have a lot of room. So it was a little big yet on him but I know it will probably be perfect for him soon. The medium on my toddler fit him nice as well as the large. The large we had snapped almost as tight as they go and the medium size was opened up a little more. But he is super skinny so having the large with a higher rise was nice.

If you would like to purchase a Charlie Banana diaper visit Target.com or Babiesrus.com.
Posted by Kristina at 8:00 AM

Thanks for the giveaway!

thanks for this giveaway. i am dying to try charlie banana so i really hope i win :-)

Wonderful review! Thank you for this giveaway!

Do you have to use the liner everytime?