Some of us have had experience with the brand of cloth diapers called Cutey Baby. I had purchased a "That's a Wrap" diapering system of theirs a while ago and although I loved the prints they offer and the fact that it had a nice fit on my baby I wasn't that impressed with it. I also like that they sell their diapers in supermarkets like Meijer, where I got mine or other stores like Jewel Osco. I was recently allowed the oppertunity to use and review thier new updated version of the "That's a Wrap" diapering system.

They sent me a medium blue/navy colored diaper,
a 2 pk of their inserts and a roll of disposable liners. 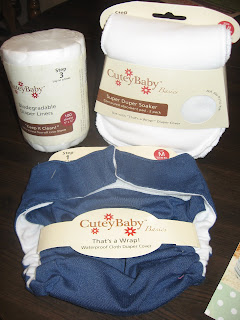 It might be kind of hard to see but in the picture below it shows (on the left) numbers on each of their items. These are the 'steps' (order) that you use the items in. This may seem kind of 'duh' to a lot of us with lots of cloth diapering experience but if you had no clue as to what cloth diapering is today this would come in rather handy.

The inserts that you use with the "Thats a wrap" are made of microfiber and have a top layer of fleece. They are sewn together in two layers to help make drying time faster. They are made with a slight hour glass shape to fit the baby's body. 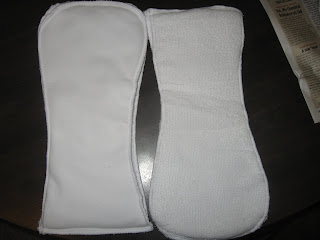 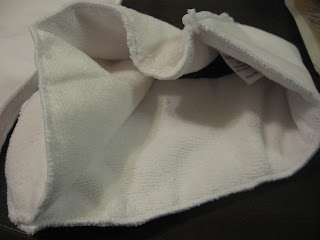 The inside of the diaper is lined with fleece. As you can see there is a big opening in the middle of the diaper which is where you put the insert in at. 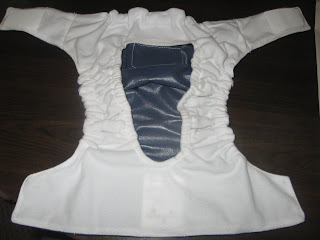 The Outside of the diaper is where I noticed the most change in the new version. They changed the velcro set up on this diaper. Instead of one long strip across the fron they now have a long strip and two little squares. There at no sewn on laundry tabs. 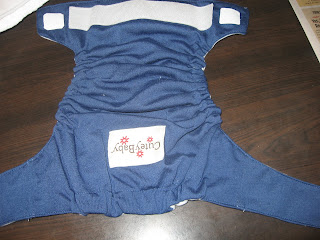 Here is my comparison pictures between the old and the new.
Top left: These are both size medium. I'm not sure if its because the white and green one is a brighter in colors or it the elastic is more stretched out but the old diaper seemed a little bit larger.
Top right: The velcro on the tabs are about the same size. the one on the right is my old version diaper. It curls really bad after just a few washings. I haven't has the new diaper long enough to tell if this will happen with the new version or not.
Bottom pictures show the differences in velrco. 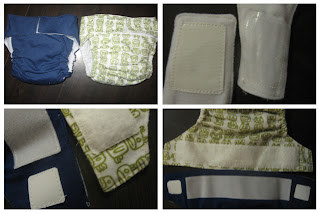 I was hoping these next pictures would have turned out better but oh well. The one on the left is the new diaper under the bottom diaper. The tabs are the main difference in size. They are a little longer and wider. The middle picture shows the 'gussets' on the diapers. The seam is wider in the new version. The last (right) picture shows the back top of the diaper. The stitching on the top is also wider than the old version.

Stuffing the "that's a wrap" diaper is really easy. You tuck one end into the diaper then push the other end up into the other side of the diaper, smooth it flat and your all set to go.

Cutey Baby is having a lot of giveaways through the end of March on their facebook page if you want to check it out.

My thoughts:
When I found out that Cutey Baby had revamped their "That's a Wrap" diaper I was interested in what they had done to improve it. I don't think the changes are anything huge and major but will hopefully improve them. They are easy to use and not really all that bulky. You have to buy the shell and the inserts separate. The shells are around $13 and the inserts are 2 for $10. So they are about the same as a pocket diaper price wise. However if the insert is only wet and not soiled you can remove the insert, let the shell air dry and reuse it. I have also used small prefolds in the shell. The diaper has a pretty good absorbency and It fit my boys fairly well. I wish it had a higher rise. The rise would probably be good for a girl as they don't pee up towards the top but more towards the middle. I really hope that the velcro doesn't curl up on the new diaper as that was my major issue with my old one. They say that the diaper comes with removable laundry tabs but neither of the diapers I have came with any.
Posted by Kristina at 12:01 AM

Where's Mommy? Is another brand to check out also

I have never liked these diapers at all. The 2 that I have are cute, but they wear down easily and the insert is sewn in to the cover. The diaper is also huge. When it's on my baby who is 14 months old and 20 lbs. I put it on as small as it will go and is still too big. Not a fan.

I haven't tried the AIO diaper yet. I have these two, one I purchased and one I was able to review as their improved product. There are some differences but it will be interesting to see in the long run how it holds up.

I am looking into my different diapering options and am wondering how has the Velcro held up for you after writing this review? Thanks for the wonderful write up of these particular diapers!

I have some of the That's a Wrap and the velcro does curl very badly. Once it is curled up it doesn't stick well at all. The rise is too low for my little girl too. But I do love the soakers and use them under my Flip covers.

I just bought one of these this week. It is super trim (compaired to the bumgenius, bummis, blueberry, and fuzzibuns that I own) on my 3 month old. It is super cute and the shell is very soft. So far I really like velcro. With my other diapers I feel I have to be super careful not to scratch my son. I really hope this diaper is durable! My plan is to see how it holds up over the the next month or so and if all goes well, I will definitely buy more. I did not buy the soakers. I already have a large stash of them.

"I am very happy to read your articles it’s very useful for me,
and I am completely satisfied with your website.
All comments and articles are very useful and very good.
Your blog is very attention-grabbing. I am loving all of the in.
turn you are sharing with each one!….

These baby diapers are very innovative. Then it is the need of choosing the right diapers for the baby too. These are very good and I recommend the readers if they are insisting at buying going for these type of diapers will be a good option.
baby gift

Outstanding post however I was wanting to know if you could write
a litte more on this topic? I'd be very thankful if you could elaborate a little
bit more. Thanks!

Thank you for sharing an interesting and very useful article. And let me share an article about health here I believe this is useful. Thank you :)

Webroot Antivirus is the strong antivirus software which provides ultimate protection for your PC. The webroot free antivirus software defends your PC against viruses, threats, malware, spyware, ransom ware, and other online threats. For any query you can click on the given link www.webroot.com/safe.

If you want to download setup of MS Office, so you can download it from here Office.com/setup.


MS office setup is the product setup record with this setup document you can introduce on your PC and a portion of the bolstered gadget to utilize Microsoft office.if you have any query related to office installation then contact us.
office.com/setup

You can learn from the help of our blog on How to Fix Error 1935 while installing Microsoft Office 2010. You can read it by click on the following link "Fix Error 1935"

This page definitely has all the information I wanted about this subject and didn’t know who to ask. Jio Lottery Winner 2020

My travel life have been easier with Garmin Express. Plus I can get all the additional knowledge through their blogs. I use the Garmin app and is totally upto the mark. I recommend everyone to use Garmin Map Update and get Garmin life time map update or call +1-888-309-0939 for instant help from Garmin GPS experts.


I did not know the entire benefits of Garmin Nuvi Update. But since I have read this blog on map update, I have installed all available updates for my garmin device. I must say that this piece of blog has helped me improve navigation experience. I am not suggesting all my friends to read this blog and get Garmin.com/Express with this team. For detailed information, you can contact us at toll-free number +1 888-309-0939. Our Garmin GPS professionals will provide instant help.

An impressive share! I have just forwarded this onto a coworker who had been conducting a little research on this. Roku.com/link is one of the most popular activation link for Roku devices that allows you to stream the various video contents on your device.

We will tell you about the simple troubleshooting tips to fix the WiFi not showing up error and let your computer connect hp deskjet 3755 printer to wifi setup.when still many HP deskjet printers need WiFi setup to begin printing.

Garmin Express provides you with new updates time to time and the same can be browsed by navigating the Garmin.com/express hence allowing you to utilize the apps with the changing needs and also provides you with new features and better technology with every update, Garmin devices are of tremendous use to the people who are in a continual need to track their location and navigation. There are many reasons as to why the Garmin devices must be believed and relied on.

These baby diapers are looking amazing I would like to prefer that everybody should use it for their babies.
office.com/setup

Everyone knows With online TV's sports offerings appear seems to be growing FuboTV, it does include major networks. it provides a wide range of interrelate channels to meet different viewing needs. the main one being its inimitable Unlimited Cloud Storage DVR. Still, when it comes to value for money and sports coverage, So it's hard to forget about FuboTV's plans. fubo.tv/Connect

You can watch the live streaming TV shows on the internet using a FuboTv that comes with more than 160 channels. Its package is made such that you can get all the channels right from your pc in less than 5 minute after downloading it. This is the best package that gives you more than hundreds channels online and has no monthly fees at all. fubotv/Connect