Ashley is a WAHM that creates custom diapers, crocheted items, as well as a range of other things. She sent me this cute one size peace sign print pocket diaper for review. 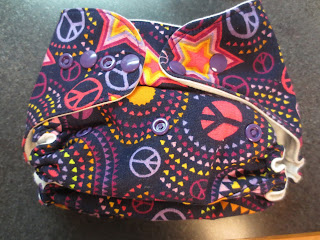 This is the diaper snapped at it's middle rise. Nyla is very into peace signs right now so when she saw it, she was very excited for Kynlie to be able to wear it. 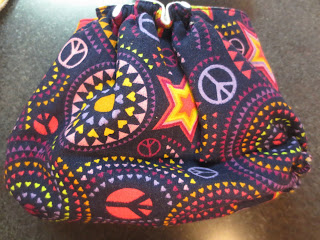 Here is a bum shot. It looks really wide at the bottom (which it isn't) because she puts a nice snug elastic at the top by the waist line. (more pics below) 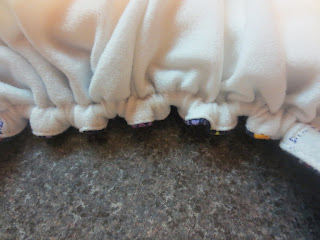 This is one of the leg sections. It has a nice soft fabric that goes against the skin and fits snug to keep anything from leaking out. The elastic was nice and tight and seems like it will last a long time. 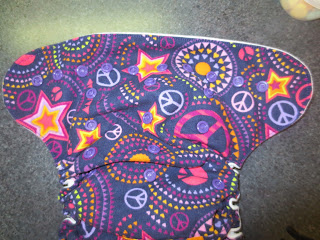 Here is the front section (goes by the belly). She uses a single row for waist snaps. I love the purple snaps for accents! 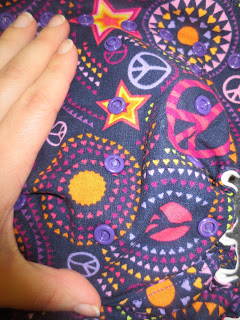 There are three snaps for the rise which gives it four full settings if you include it being fully open. We were able to use it on the second snap rise and Kynlie is about 23 pounds so this will work really well for tall babies and last quite a while. 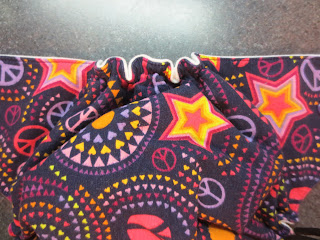 Here is a pic of the back elastic. You will get no explosions leaking out the back of this baby! 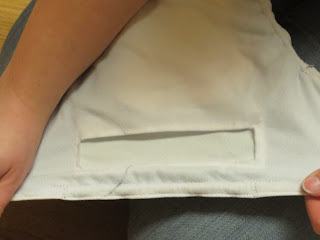 Here is an inner pic of the pocket opening in the back of the diaper. It is nice and wide and fits an insert in perfectly. I had to hold it stretched open because the elastic in the back is so tight! 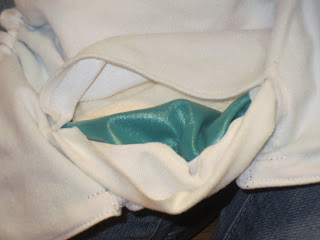 This is the pocket opened. There is a small flap that tucks under the opening to prevent the microfiber from sneaking out and touching baby's skin. This diaper shocked me when I saw that crazy teal PUL! 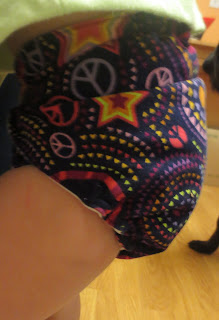 This diaper was nice and trim. It wasn't the most trim diaper I have ever used but it really depends on the type of insert you use as well. We used a pretty thick microfiber insert in this picture and it still is a pretty trim fit. You can also see the diaper bunched about half way up as well. I probably could have snapped the rise down one more at this time. Here is was at the third rise snap. 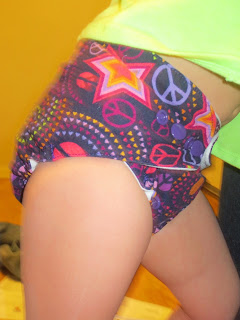 We were able to get a good snug fit around the legs and even though the elastic made it wavy around the legs, we had no leaking issues. The wavy-ness reminds me of a Grovia newborn diaper. 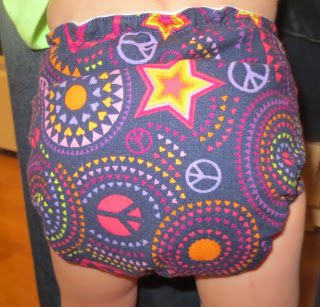 Bum shot! The fabric on the outer is not actually PUL so it did fade a bit after a few washed but it is still vibrant and fun! My girls love the peace signs and hearts. You can see the elastic at the top of the diaper. It gave us a good fit at the top. 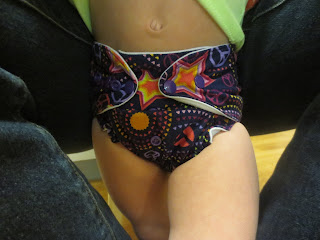 Here you can also see that she uses crossover snaps (on the left side of the pic) for those skinny minis. We didn't end up needing them for Kynlie which she normally does. My only concern appears in this photo...it isn't anything major but something I want to point out. You can see the curving up of the bottom of the diaper "flap". This didn't cause any issues of any diaper functionality but I think could be prevented by adding a second row of waist snaps. It didn't make us like the diaper any less. With some diapers, this is what encourages the drooping of the wings underneath. I have seen some of her other diapers with the double row, so if you prefer that, just let her know. 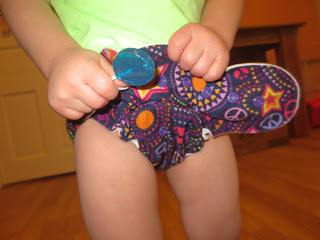 Kynlie was sick of playing model so she decided to take things into her own hands. As you can see the sucker bribe didn't work so well. 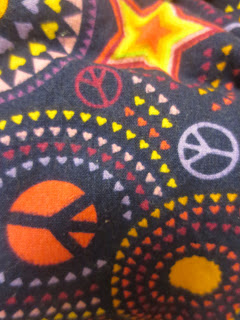 Overall this diaper worked great for us. We used a microfiber insert during the day and a microfiber and hemp insert at night. We didn't have any leaking and very minimal red marks on the legs.

Ashley, the mama and owner of Golden Bums is very generously offering a $20 custom diaper to one Cloth Diaper Addiction reader. Simply fill out the rafflecoptor form and we'll pick a winner on February 28th! It isn't required to like her page but since you'll have the chance to win one of her diapers, it would be nice! Tell her CDA sent you!


a Rafflecopter giveaway
Posted by Jen at 8:00 AM

I like the argyle print but Valentines print 3 is a close second:)

Any of the Mickey Mouse would be super cute!
e841r at yahoo dot com

I would love a dallas cowboys diaper, dont see it specifically but i see other teams:)

I really liked the print with the hearts posted on FB.

I love the Jack Skully and the Galaxy prints!

the red diaper with nautical print is cute.

Love all the prints and the Ruffled diapers! :)

Love all the prints and the Ruffled diapers! :)

omg she has a zelda diaper!!

yoda! my house is full starwars and star treck men.

My dad would love the yoda diaper

I like many of the prints, but I enjoy the blue chevron the most!

I like the Valentines day print #7 with the pink owls and hearts its so cute!

I love the Mickey 6 pattern :D

I love the Valentine's Day Print 7 with the little owls!

Star wars ANYTHING would make daddy eager to CD! lol

LOVE the space and hunting theme ones!

LOVE the monkeys from the flash sale!

i love the monkey print!!!