When I had shared my Things I Wish I Had Known Before Cloth Diapering post, I mentioned using coconut oil as a diaper cream. So often I mention this and people inevitably say, "What?!" I confess, I did too! But, after 3 year, we have found this is the best for us as far as diaper creams go.

Coconut oil is simply amazing. I started using it, as most people do, in the kitchen as a healthier oil option (and on occasion, a sweetener in my tea). As I started learning more about the benefits of coconut oil, I wondered if it could be used ON the body, as well as IN the body. Sure enough, there are countless ways people use coconut oil.

Our second son had horrible eczema and everything our pediatrician suggested just made things worse. On a whim, I decided to try some coconut oil - within a day, his eczema had calmed down considerably! We've also used coconut oil on sunburns, a facial moisturizer and as a massage oil.

So here's the big kicker about coconut oil. It is anti-fungal, anti-viral and antibacterial. WOW! Simply put: it's pretty amazing stuff (wait, did I say that already?!) Our second son caught thrush (thankfully, I never did!) - it was all in his mouth and all over his poor bottom. Every time I changed his diaper, I added a swipe of coconut oil (he was only a couple weeks old and I could not find credible information on whether or not it was to directly give him coconut oil, so, I took it myself -which is probably why I never got it). Once I started that regimen, his thrush was virtually gone. (to read more on coconut oil and yeast, visit this site).

When you purchase your coconut oil (more on that in a minute), it will most likely be in its solid state. As it warms, it liquifies (usually around 72-76 degrees Fahrenheit). Whether it is in the liquid or solid state, it is fine to use (no need to put it in the refrigerator either. We leave our kitchen jar by the stove for easy access, and our "diaper jars" right with the diapers). If it is in the solid form, once you scoop some out, it will start to liquefy, and by the time it is on baby's bottom, it will be very oil. 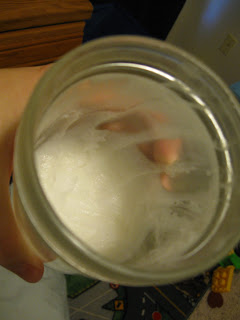 And our kitchen jar (starting to liquefy, as I was baking in the kitchen and it was starting to warm up!) - 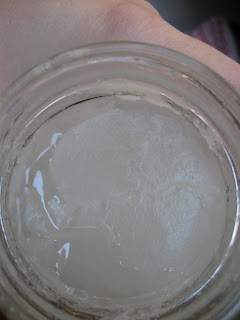 So, where do you purchase this stuff? Good question! I've yet to see it at your regular grocery store (WalMart, Kroger, etc...). We typically purchase ours as needed (which isn't too often, as a little bit goes a long way!) from a local health food store. But there are many places to purchase online in bulk (my favorite being Tropical Traditions). They even have a whole section with FAQs on coconut oil!

And of course, what everyone here is wondering, yes! Coconut oil is totally safe for cloth diapers. There is no need to use liners, and no need to do any special wash routine when using coconut oil. We use it every night on our toddler before putting his night time diaper on (as being in a diaper for too long really irritates his skin). We notice such a difference when we forget to put it on and when we remember - he notices too, and is pretty much at the point where, if we forget, he asks for it! We used coconut oil on our newborn when he was just days old and the detergent we were using irritated his skin.

So, there you have it. Coconut oil in a...well, nut shell! I know there are cloth diaper friendly diaper creams out there, but this is what works for us and we love it! (Ok, and yes, we love the smell too!