Our Week with Disposables


Well, as the title says, we've been using disposables for the last week or so.  My son had a diaper rash that just wouldn't go away!  After looking up some info online, I'm pretty sure it was a yeast infection.  I'm not positive how he got it, and not even positive that's what it was, but after doing some research, it seemed like the best way to beat a yeast infection was to use disposables until it was cleared up.  Sooo, after bleaching my diapers to get rid of the yeast (which was quite painful for me to do), we resorted to using disposables until his little bum was cleared up.  And yes, I know there are other ways to get rid of yeast, but bleach is the only thing that will for sure kill yeast, and I didn't want to have the rash continue to come back if other things didn't work.

So...our week with disposables.  You know it's funny, I always hear people say that cloth diapers are gross, what do you do with the poop, doesn't it gross you out, etc.  But I have to say, using disposables kind of grossed me out. 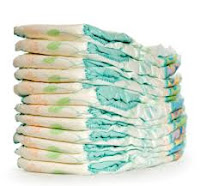 First of all, they smelled weird!!  I don't really notice a smell with our cloth diapers (unless, obviously, there's poop).  But I did consistently notice a smell with the disposable diapers, even if he had only peed.  Yuck.
Also, they felt gross!  One "downfall" of cloth diapers is that you often can't tell when babies have gone in them; even having used cloth diapers for 20 months, I still sometimes can't tell if Myles is wet or not.  But in a disposable diaper, you can tell because it gets really squishy and mushy.  This kind of weirded me out!  I'm sure if I was used to it, it wouldn't be a big deal, but having a big squishy diaper on Myles was kind of gross.
One other problem we had with disposables is that Myles' clothes don't fit!!  He's pretty skinny to begin with, but in disposables, his pants literally kept falling down!  I had to use a safety pin a few times to keep his pants up :)  So if we used disposables all the time, I think we'd have to invest in a few child-size belts to keep his pants on!!
The other thing I couldn't believe was how. much. garbage. they created!!  In only a week, I had two grocery-size bags full of diapers.  It was insane!!  I just kept thinking of how many diapers are in landfills if this is how much garbage one child is making in a week.  Crazy! 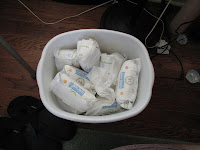 Now, all of this to say, I AM glad that I was able to use disposables!  The thought of having to continue trying different things to get rid of yeast in my diapers, all while using them and passing the yeast on, just sounded like way too much work.  So I am glad that I have disposables to fall back on when something like this happens.  Or even while traveling.  BUT, I am SO glad to have my little guy's bum back in his nice, fluffy, good smelling diapers :)

How about you guys?  Have you ever had to resort to disposables?  How did you feel about them?
Posted by Katie at 8:00 AM

I was told by my cloth-diaper-supportive pediatrician that my daughter's disgusting rash was something that required her to be completely dry for about a week, and that we would need to use disposables. I felt physically ill. They DO smell weird, and they ARE gross. But then I remembered that Flip makes a biodegradable disposable insert that works pretty much just like a regular disposable. So I used those, and while I didn't love them, I, like you, was glad I had the option for a very short period of time. (I can't even walk down the disposable aisle in the store, they smell so nasty to me)

We had to switch to disposables and potty train early because of yeast reoccurence. It would go away and come back, and eventually one day she got such a bad infection that she almost died from it. Think seizures, 3 weeks of 104 fevers, spinal tap, seclusion, and universal antibiotics. Was told with modern cloth diapers, you can't get the yeast out because you can't bleach as much as necessary. I quickly quitted and started potty training...and for the next child, we will use flats. Infections are scary and it's not worth spending all that time in the hospital just to cloth diaper. Be careful, if your son has an ongoing rash. I washed my diapers 8-10 times each time because I was so scared. I *THINK* girls are more sensitive or prone to infections though. Good luck!

We use disposables at night because I cant deal with the overnight stink. I tried everything to get rid of the stink, even bleaching, but nothing would help the overnight grossness. We even travel with our cloth, its not a big deal to us, but the night stink-no way!

Disposables are so disgusting, right? Whenever we've used them, my husband and I end up talking about how nasty they are. They smell way worse than cloth -- I couldn't even keep a day's worth of dirty 'sposies in my bathroom without having to empty the trash. And the goopy droopiness is horrible!

WE use disposables at night as well, I have tried everything available to me to get my kids through the night dry and rash free in the morning, but alas nothing has even come close to working. I just am happy, that at this point, with two in diapers we still are decreasing our footprint. And to agree with you, disposable diapers are weird, very squishy.

This blog is so nice to me. I will continue to come here again and again. Visit my link as well. Good luck
obat aborsi
cara menggugurkan kandungan
obat telat datang bulan
obat penggugur kandungan