So I am wondering if anyone has found the prefect velcro diaper? No, really I am! I was really disgusted to find out that after a short 4-5 months that my velcro on my (start sarcasm here) new and improved super wonderful 4.0 diapers would be far superior to the 'old' velcro found on the 3.0's. (end sarcasm). I thought I had heard in the video that BG released introducing the new 4.0 diaper that velcro they are now using would last way longer...really mine was curling like crazy after only 4 months of use! That is just crazy and if 4 months is way longer I hate to see how long the 3.0's lasted, yikes! So anyways, sorry about the rant! :)

I decided that I would take the plunge and get them converted...here is the cheap-o dutch in me coming out. Seriously? $3.00 to convert a diaper o snaps? Ouch to the PP account! If I wanted to spend that much money I would have purchased some easy fits instead (which have good, happy velcro). I decided to post on FluffSwappers that I was looking to convert some of my diapers and if anyone knew of someone who did a good job for a good price to let me know. 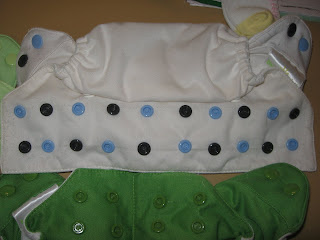 I was contacted by Lacey who was just starting to get into the 'snap' business. Her prices where in my budget but I was also a little worried about sending my precious diapers away to someone, especially someone who was just getting into the conversion business. After some chit chat and looking at some pictures of other diapers she had converted I decided to give it a go. I sent her 7 diapers to convert for me. The turn around time was great for me, it took about a week to get them done. Lacey stayed in contact with me the whole time and was wonderful to work with. I was able to pick the snap colors that I wanted and the layout for them (like the 4.0 snaps or I could have had them done some other way to probably). 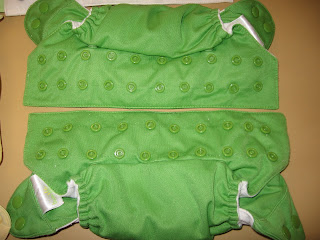 The big package arrived on my doorstep shortly after she let me know they had been sent back to me. I was so excited to see them! They looked AMAZING! I was very happy with them and played with each diaper testing the snaps out. On one diaper I had the snap on the tab pop off and contacted Lacey about this. She told me to send it on back to her and she would fix it as well as refund the shipping cost to send it back, plus she would pay the shipping cost to get it back to me. 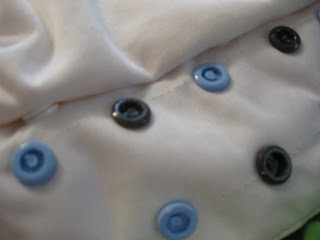 Lacey was fantastic to work with, did a great job with the conversions, had great customer service, great prices and overall I had a great experience with her. If you are looking to get some diapers converted look her up on her FB page at: Going Green 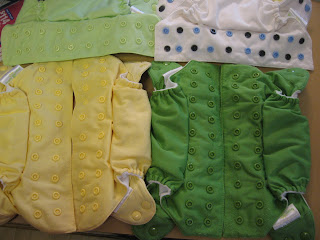 For covers: $2.00 per diaper, unless extra PUL is needed, then price will increase

All others will have to be discussed on a diaper by daiper basis. You are responsible for shipping to and from my house, but I can help you find the cheapest shipping mode. We are a smoke-free, puppy friendly home.

She will also remove .50 cents from the price if you remove the velcro! I was able to convert my diapers to snaps for $1.50 each plus shipping. It was great! 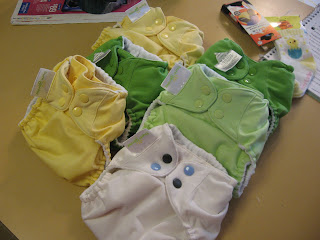 Thank you for everything Lacey!

I honestly haven't had a problem with the velcro on my 3.0's or 4.0's. Easyfits also have good velcro. And thirsties.
Looks like Lacey did a great job. I especially love the white one with the two tone color snaps. Supte cute! I will keep her in mind if I need any converting done

Natural Baby Company used to make a product called Wonder Wraps, which were a diaper cover. They had some type of touchtape (aplix?) closure that was very soft on both sides (not prickly like velcro is) and worked fantastically for me. Sadly, they have decided to forgo their Wonder Wraps and focus solely on the new GroVia diapers, but maybe you would be able to find out what kind of stuff they used to use on the WWs and maybe that would help. Maybe you could switch out the velcro for that stuff? Sorry you're having such a rough time. Mine got that way, too, to a point. I mean, my 3.0s did, not the WWs. I'm so glad you found someone who did such a fantastic job switching you to snaps, though!

I haven't had any issues with the velcro on my Bummis Super Whisper Wraps, but if you are only a pocket diaper fan I guess that doesn't help you too much.

P.S. I am using my Bummis SWWs on a third baby now.

converting my BG's was the best thing I did with them

My aplix 4.0's are having the same issues. I'm looking into having them converted. Just not crazy about paying to ship them off somewhere AND back. Thanks for the info, I'll look into Going Green!

I really like my one Ragababe I have. The velcro is great! It's really an AIO but with a pocket (which I stuff anyway) I actually won it months ago, but the price is $25 for one I think. If I could afford more, I'd get a whole stash of them. The fit is great too!

Just a note to anyone reading the comments. NEVER go with gDiapers. You're velcro will die on you in only a few washes! UGH!

I've never had a problem with gDiapers....and I have a bunch of friends that have been using them for over a year with no problems.

But those are the ONLY diapers that I have with velcro. Otherwise I stay far, far away from velcro on everything.

the one and only reason why i hate thirsties. the velcro sucks and it makes me sad =[ i love the diaper all together but my 7 month old will move and the diaper falls apart. LOL. i'll have to check out the conversions!

Granted, the only Velcro diapers I have were used when I got them, but I don't like them. They collect fuzzies in the wash and don't stick properly to their laundry tabs. And it falls apart far too easily.

Boise, I love my Bummis SWW! They are great!

My thirsties seem to be holding up fairly well. I can see that they might become a problem though. I try to hand dry anything velcro 100% of the time. Other items I try to hang as much as possibly but sometimes you run out of time to wait for them to dry so I put my snap diapers in the dryer on low heat. But yeah velcro hangs either way!

I love all your input on the topic of velcro! Thanks everyone!

So far the best velcro I have come across is on "Green Line Diapers". It is durable, been through the dryer every wash and hasn't even curled.