One of the ways my family and I have tried to make less waste and "go green" is by using more unpaper towels.  This was a concept that made so much sense to me.  Why throw away so many paper towels when you could just wash cloth ones and use them over again!  I was already using this concept with my cleaning supplies and had a lot of rags that I used to clean with, but I didn't really want to use rags in my kitchen.  So I was really excited when the concept of unpaper towels started getting more popular!  And luckily, Jessica, from Joyful Girl Designs, gave me the chance to review her unpaper towels.
I actually first came across Joyful Girl Designs when Jessica was making wool covers.  We have a lot of her upcycled sweater wool covers in our stash and love them.  I was really bummed when she stopped making them, but, she stopped making them so she could focus on other things--like, unpaper towels of course!  She also makes awesome wet bags, sandwich bags, baby wipes, and some other things to help reduce waste in your home.
Jessica sent me some adorable "Cherries" unpaper towels, as well as a kitchen wet bag to store them in.  And I must say, having the wet bag has been awesome.  When I started using unpaper towels, the biggest problem I had was where to store them until laundry day.  So I'm so glad that I received the hanging wet bag to go along with the towels!  Here's the wet bag she sent me: 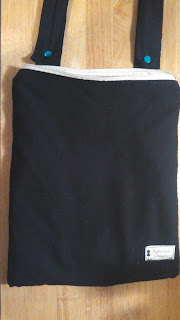 It's really simple, but I love it.  It's the perfect size for the kitchen-big enough to hold probably 6-10 unpaper towels and a few baby washcloths.  I love that it has two straps, so it hangs nicely in the kitchen. 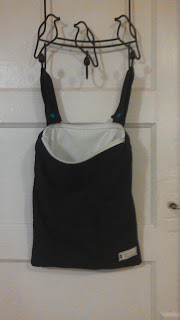 The door to our basement is in our kitchen, so it's the perfect place to hang the wetbag!  She also has wetbags with just one strap, so you could hang it from a kitchen cupboard or something.
The wetbag is great quality.  The PUL inside is nice and thick.  We haven't had any leaking with this wetbag.  It also has a zipper, so if you want to seal it shut, you can.  I've found that leaving it open works best for us--that way the towels can dry out, and it's also less smelly than sealing it shut.  But it's a nice option to have the zipper if you ever wanted to use the wetbag for diapers or swimsuits or something.
One tip to using a wetbag for kitchen cloths-I've found that letting my unpaper towels (as well as washcloths for cleaning up after meals) dry before I put them in the bag keeps them from getting mildewy and smelly.  Because I don't do my regular laundry as often as diaper laundry, I actually had a few baby washcloths get mildewy because they sat, wet, in the bottom of the wetbag for a while before washing them.  But letting them dry out ahead of time stopped this problem!

Now, on to the unpaper towels.  Here's the set she sent me: 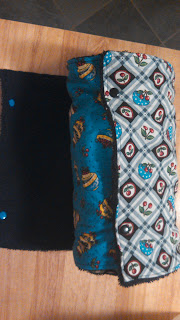 They are adorable!!  And I actually love that one side is black-it keeps any stains from showing up!
So, basically, one side is cotton, and the other side is a cotton-terry.  The cotton-terry side is really absorbent!  Much more absorbent than a regular paper towel.  And I find that I can do some serious scrubbing with these compared to paper.
The quality of these are awesome.  They're nice and thick.  They also have snaps on both sides, so that they go together, just like a paper towel roll. 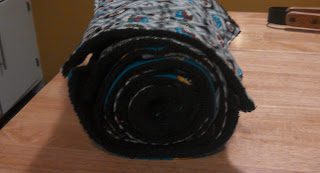 The snaps are really nice quality--nice and strong. 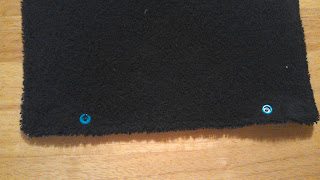 These unpaper towels do fit on a paper towel stand, but I actually found it to be easier to not even bother with the stand.  The stand I have is a little small, so it was hard to "pull" one of these off.  I just keep the roll under the sink.

These unpaper towels make an awesome addition to any kitchen or cleaning basket!!  I love them.  They're so much more absorbent than a paper towel and save so much waste.  And because they snap together just like a roll of paper towels, they can be stored just like paper towels.  I've also washed them quite a few times already and they still look brand new.  There's been no fraying of the fabric.  And although they shrink a little bit, they still snap together nicely.  The quality of these towels is amazing.
I also think having the wet bag is really helpful.  Unless you have a lot of kitchen space and have room for a basket to keep dirty cloths in, having a small bag to hang them in is a life saver.
Joyful Girl Designs has so many adorable prints to choose from, be sure to check them all out!  They come in sets of a dozen for $39, which is really affordable.  All you need is one set to save you from dozens of rolls of paper towels.  Now is the perfect time to check out her other great items, like reusable sandwich bags, wet bags, and even mama cloth--she's offering a discount of $10 off any purchase of $20 or more with the code CDA10 in the etsy shop, a great deal!

Also, lucky for you guys, Jessica is giving away 6 unpaper towels to one lucky reader in this adorable "Sow n Grow" print.  Be sure to enter below!! 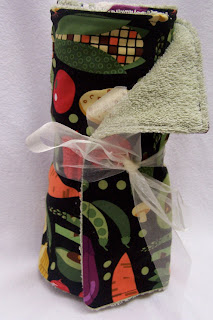 I like the "everything nice" brown unpaper towels with matching wetbag.

I have been doing business with Joyful Girl Designs for a long time and love Jessica's stuff!

I recently ordered a set of 12 unpaper towels and a kitchen wet bag from Joyful Girl Designs and am looking forward to it's arrival! I would love to win more unpaper towels! Tammy Barker

I love the kiss the cook unpaper towels. http://www.etsy.com/listing/124944407/blue-kiss-the-cook-unpaper-towels-set-of?ref=shop_home_active

So many great products! I really like the Everything Nice Gray Unpaper Towels

I like the Into the Forest Mama Cloth Make Up Wet Bag.

I LOVE the look of her un-paper towels! I would LOVE to try them! Of the ones she currently has listed, I like the "Blue Kiss the Cook" ones. =)

My favorite is their Classic Kitchen Unpaper Towels.

I love the Into the Forest Mama Cloth Make Up Wet Bag.

P.S THANKS FOR THE FIND
BONNIE R

I love the Chevron snack bags!