I was contacted by NaraBums to try out a couple of her fitted diapers. I was sent a  OS fitted diaper (to be reviewed later) as well as a new fitted she is just working on introducing which is this newborn fitted diaper. It is made of a soft Sherpa material in a light blue color and have a fun rainbow serge around the edges. The fitted diaper  has an AI2 style so that is has a soaker that snaps in and out so you can adjust the absorbancy. The top of the diaper features a dip across the front to accommodate an umbilical cord as well as rise snaps so if you have a tini-tiny or a little bitty baby you can get the right fit.

I would recommend using the fitted diaper with out the snap in soaker for a newborn and then when they get a little bigger add in the soaker. 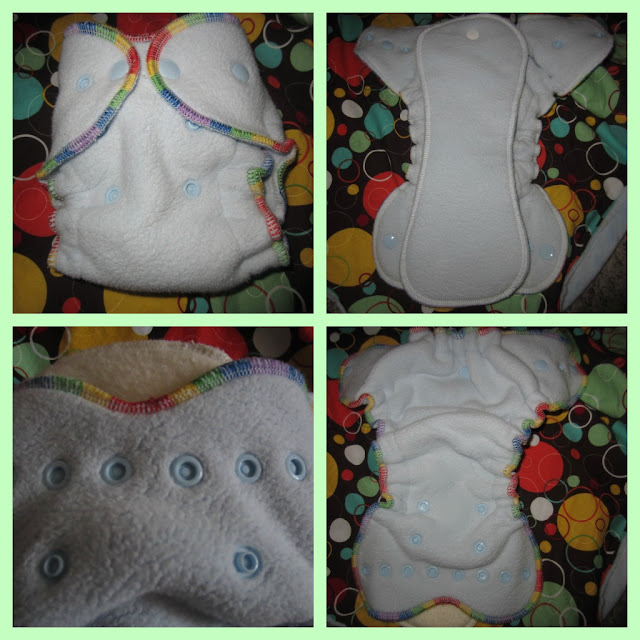 This diaper washes up quite nicely. While testing it out for NaraBums I did notice a few things.
1-This diaper was pretty wide between the legs for my little guy and he was kind of automatically frog legged while wearing it.
2- At 13  pounds he was close to growing out of it and on its last snaps.

I passed the concerns over to NaraBums and she did some readjustment on her pattern to trim it up a bit between the legs as well as make it a little bit more accommodating to fit newborns a little bit longer.

You can see the fitted diaper in use above on Micah. He was around 12 weeks old in the pictures and in the 13 pound range for weight. The adjustments that NaraBums made to the diaper will help give a more comfortable fit between the legs and over all fit.

Over all I liked this fitted diaper for Micah. He was on the upper end for size when we received it was was able to use it for a little bit. I really like how comfortable the material is on this diaper (sherpa) and the dip across the front of it is really awesome for the newborn who still has the cord. This material does require  (from my experience) a few washings before it will be nice and absorbent. After a few washings were were able to use it though   the night easily. The back side of the diaper is nice and trim so you don't really get a huge fluffy bum with it which is nice because babies wearing this size diaper don't really need a big ole' fluffy bum. I would recommend this fitted diaper to someone who was looking to get fitteds for their baby because of how comfortable it was, especially with the new adjustments made to the pattern  of the diaper.
Posted by Kristina at 8:00 AM