I was contacted to review Alvin, a dinosaur character from the cartoon show Dinosaur Train. My 2 older boys LOVE to watch this show and learn about dinosaurs. So I was pretty excited to get this item to review. I didn't tell my boys about it so it was a big surprise for them when they opened it. I have to say they were pretty excited when they opened up the new Dinosaur toy!

After opening the box and taking Alvin out I handed it over for my boys to explore. They found the noise making button right away. There are actually a couple of buttons on Alvin. The one on his head opens his mouth and shares information about this kind of dinosaur. Such as "I'm a carnivore, I love to eat meat." So while the kids are playing with this they are learning about the dinosaur. The other button also has some fun sayings such as  "This is my territory!" and it also makes him jump forward which my boys love to see.

On the front of the dinosaur there is an infra-red light sensor. What this allows is communication between Alvin and other InterAction Figures from Dinosaur Train to talk back and forth together. We don't have any of the other dinosaurs for them to interact with but we have seen them at the store and they are pretty fun. 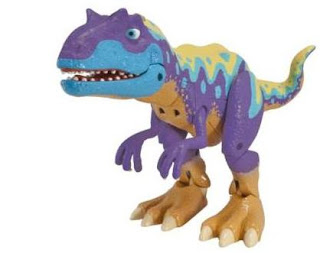 Over all my boys really enjoy watching Alvin in action while playing with him and stomping him around crushing cars etc with  him.

We will be giving away an Alvin dinosaur to a lucky reader, thanks to  our sponsor. To enter to win comment below with your child's favorite Dinosaur Train Character.

How lucky is it that my son's favorite is Alvin. :)

Connor just loves Buddy. It was a match made in heaven, lol! His favorite color has always been orange and then along came Dinosaur Train and Buddy and he was just smitten!! To boot, his birthday is 9/15 and we are having a full Dinosaur train themed party!! I'm just so excited!!

Of course, that was the first one of these we bought for him!! We know that the big dinos are quite expensive, and we plan to keep these until he's at least 6, so the more the merrier! Thanks for the giveaway in advance!

My boys love dinosaur train, this would be awesome!!

My son's favorite character is Don. He giggles at every "la la loooo" :)

My 4 yo daughter's favorite character is Shiny!

My Lil guy only wears shirts with a Dino on it lol I think he loves any TRex he fav Is buddy and any TRex on the show. : ) Hisservants.hills@gmail.com

My daughter's favorite is Tiny, and my son loves Buddy.

We've never seen it so we don't have a favorite but my boys love any and all dinosaurs!

you think my daughter would like tiny but no shes all buddy!
Bonnie r

winner is Emily Kuhn! Thanks to all for entering!

This information is very useful. thank you for sharing. and I will also share information about health through the website

I must admit that your post is really interesting. I have spent a lot of my spare time reading your content. Thank you a lot!
Bigg Boss 13

Aw, this was a very nice post. Taking the time and actual effort to produce a superb article… but what can I say… I procrastinate a whole lot and never manage to get anything done.
Watch Ek Bhram Sarvagun Sampanna Video Online

Love your website design, colour. I procrastinate a whole lot and never manage to get anything done.
alappuzha boat house booking

Hi there, just became alert to your blog through Google, and found that it’s really informative. I’m going to watch out for brussels. I will be grateful if you continue this in future. Lots of people will be benefited from your writing. Cheers!
Yeh Rishtey Hain Pyaar Ke Latest Episode

Abeer and Meher's marriage ends as they have too many differences between them.
a successful Abeer falls for Meher after he is forced to live under her roof.

Star Plus is giving his best Hindi Dramas with all latest episodes in very high quality. keep in touch with us every time to watch All episodes.

Welcome to DesiSerials Youtube Channel. We exhibit desi serial channels
broadcast online. Desi TV Serial that are loved by people around the world.

All Zee Tv upcoming promo updated there, Naagin 4 promo is out and we are all too excited to see
who the new Naagin is in this season, who is supposed to be deadliest of them...

Yehh Jadu Hai Jinn Ka! is fantacy drama serial by indian tv channel
on Star Plus and directed by ram gopal verma and it is huge trp serial.


123Movierulz is a movie piracy site, which allows you to download the latest
Bollywood, Hollywood & Punjabi movies. If you are a movie lover you should know

Malu drama is Official website on melayudrama Watch the sequential serial starts airing on,
2020 on the TV3 Akasia space
melayudrama

Hi, constantly i used to check weblog posts here in the early hours in the morning, because i like to find out more and more.
Just Because of the special TV show Kundali Bhagya which is presenting by Zee TV channel.


ust when people are still enjoying all the craze around Bigg Boss 13,
the buzz for the next season is almost here. It looks like Bigg Boss 14


Watch and download Online free dramas in Fast Streaming and in HD Quality,
Kshow is a best and interesting dramas in English Subtitle.

Asian Embed This site is a free entertainment platform where you can stream the latest and past Asian shows such as Korean,
Taiwanese and Japanese dramas and movies with English subtitles and in high quality
www1.asianembed.net