Recently, I was given the chance to review a diaper from Momma Made, a WAHM who makes cloth diapers.  The Momma behind Momma Made is Lindsey, who has two young children.  She's been making diapers since January--she has a newer business, so make sure to show her some love! :)  And with how cute her diapers are, I don't think that will be a problem.  Lindsey sent me a super soft, minky pocket diaper to try.  It's absolutely adorable! 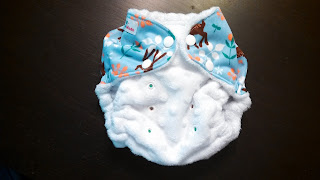 I can honestly say that I've never seen a diaper like this before!  It's mostly minky fabric, but it also has some PUL that goes across the back, creating a super cute look.  I absolutely love this woodland's print!  It's a little girly for my little guy, but he's been wearing it anyway!  And it's soooo soft, he's never complained! :)  Here's what it looks like on the back: 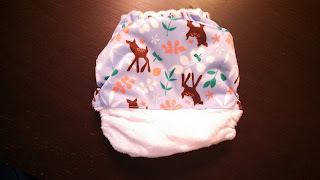 I absolutely love the combo of the minky and the PUL.  It looks so cute and is so so soft.  The snaps are also colored and coordinating.  I thought at first they were just colored to match the diaper (which they are), but they're also color coded to help you figure out which snaps to use.  The snaps and wings are actually angled, which not only looks cute, but also helped me get a better fit on my son.  Basically, if you can see on the picture below, rather than snapping the wings on the snaps that are one on top of the other, you actually use the colors that match-- so, brown on top and brown on bottom, or the green on top and the green on bottom.  It's a little hard to explain, but really easy once you try it out.  If you can see on the snaps below, it starts with two brown snaps on the left side, angled slightly to match with the angled wings.

So, how did this diaper work for us?  It worked great!  I didn't receive any inserts to go with the pocket diaper, so I can't vouch for how they'd work, but the diaper itself worked great.  We got a really good fit on my skinny son, with no gaping at the legs.  And like I said before, the inside of the diaper is made out of minky material and is SO soft!  The elastic is also inside the minky, so we had absolutely no issues with this diaper leaving red marks on his legs.

The pocket itself is nice and large, if you can tell from the picture above.  It's a little lower on the back, and has a nice, big flap to cover the opening, which I really like.  That way there's not much of a chance of it opening and letting the inserts touch baby's skin.  The pocket also opens all the way across, which is helpful for stuffing.
We've been using this diaper for a few weeks now and have had absolutely no leaks!  And as I said before, it's just so soft that this is one of the first diapers I've been reaching for.  Here's a front view of my son wearing it (and no, it's not a giant bruise on his stomach--it's marker :) ):
The picture makes it look a little small, but it is actually a really good fit.  This diaper is a little small....not sure if the rise is big enough to fit a super tall baby, but Myles is pretty tall for his age, and aside what it looks like in this picture, we do actually have some room to grow.  He's 25lbs, pretty tall and skinny, and on the highest rise setting.

Here's a few other "side" shots.  I would have gotten more picture of him in the diaper, but geesh, are toddlers hard to get pictures of!!! 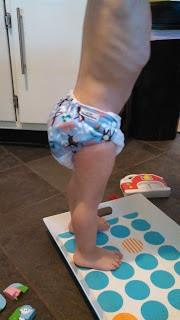 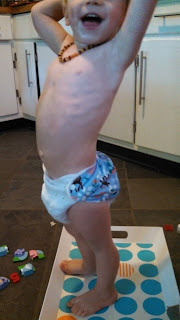 This diaper is a little bulky, I think it's because of the minky.  But it still fits in all his pants just fine-I think it just "poofs" out a little when it's not contained.  However, this isn't a problem for us--actually, it helps keep his pants up! :)

Overall, we absolutely love this diaper!  It's absolutely adorable, and definitely the softest diaper we own.  It works great, and is affordable.  Be sure to check out Momma Made's facebook page and hyena cart to get a diaper of your own.  Lindsey also makes AI2 diapers, hybrid fitteds, and some smaller items, like nursing pads, and diaper keychains.  If you'd like to purchase any of them, she's offering a 10% discount for Cloth Diaper Addiction fans!  Just let her know in the checkout notes that Cloth Diaper Addiction sent you, and she'll apply 10% off.
She's also giving one lucky reader a $10 discount on any diaper order, so be sure to enter below!!


In terms of value and purchasing power, trades between individual replica watches uk owners offer more potential for one to “come out ahead”, without bad blood. Dealers don't become rolex replica uk emotionally captivated by watches, but collectors can be. A private trade partner seeking an elusive piece to rolex replica uk complete a themed collection may be willing to take a value hit if that sacrifice rolex replica uk secures a coveted target model. If owner “A” can offer a rare or sentimentally appealing replica watches sale model that partner “B” favors over his current, albeit more valuable piece, “A” can walk away with more monetary value in hand than B received. Find the ideal match, and collector trades can be mutually replica watches sale gratifying. However, flexibility is not a hallmark of the collector trade scene. Trades between rolex replica individuals are more dependent upon finding perfect one-for-one matches than when individuals rolex replica sale trade with dealers.