The Hunter, and the Prey

Hi, my name is Kristina, and I am a hunter. No I don't go tracking out in the woods with a big ole' gun slung around my shoulder looking for animals to kill. I hunt other things...and you might think I am crazy for it but if you haven't noticed the title of my blog I suggest looking at it again. I have a cloth diaper addiction! And I find myself hunting for the perfect diaper all the time. I sometimes think I am crazy because of this, I know my husband thinks I am crazy because of this and the rest of my family...yeah they think I am a goner pretty much.

This past year I have been 'hunting' different prey. Starting around January I started hearing more and more about Ragababe cloth diapers. You can't just go to any store and buy one of these bad boys, you have to hunt, and hunt and hunt some more often times throwing in an arm or a leg as bait. Now did I really need to spend $36 bucks on a (new) diaper. No, I didn't but seriously its all about the hunt. And after bagging one of these beasts it almost want to make you hang it on the wall so you can enjoy your trophy with out worrying about it being crapped in. 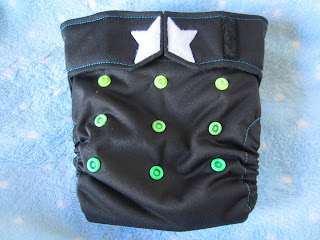 What does it take to hunt a Ragababe cloth diaper? Mad skills and pure luck is about it...oh and a large paypal account. Currently Ragababe is switching to a new server which hopefully will make scoring one of their diapers a little less hectic but we won't know for sure until that actually happens. However before their last attack (thanks to godaddy.com) and getting shut down while people were trying to get a hold of a mystery diaper they had a fairly good system of stocking their diapers.You would have to sit at your computer for about half and hour hoping to see a yellow drop down box saying the diaper was in stock and then add it to your cart as quick as possible and 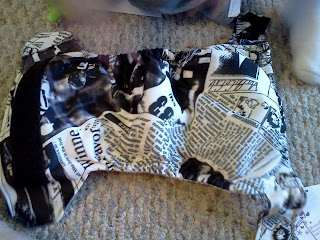 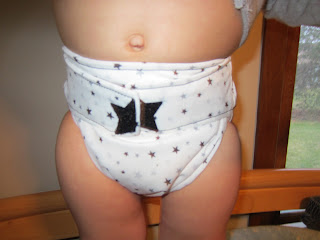 check out faster than possible hoping that it didn't jump out of your cart before you made it to the final purchase confirmation number. I was lucky enough to get the diaper I wanted each time that I tried to get it.

You also can have the chance to win a 'stock free' diaper where you still have to purchase the diaper at full price but don't have to hunt for it. This is called their 'golden ticket' diaper. You enter to win on their facebook page by answering their questions. I was also lucky enough to win one of these diapers, a rare black 2 step with blue stitching and green fade snaps (which is gorgeous by the way).

So it is possible to buy a new Ragababe diaper you just have to know what you are doing to be able to actually get one. You can also find used Ragababe diapers on Spots, Ebay, and occasionally on the Ragababe B/S/T swap page but you will find yourself paying retail (for used) or even more.

Ragababe cloth diapers are not the only diapers that you have to hunt for if you want one. There are other great WAHM diapers that stock their stores one a week and sell out of their diapers before you even realized they has posted them for sale. I currently have 2 size 2 steps for my son to wear and I find the fit is great on him. The ones I have do have the rise snaps on them. I didn't care for the snapless as well as the snapped ones because they tend to sag in the middle when he was wearing them just because it was a tad to big. I also have 2 newborn AIO diapers, 2 small AIO diapers and 2 size 0 2step diapers for our new baby to wear. Overall the Ragababe cloth diapers are really nice, they do get the normal piling that almost every cloth diaper gets. Their aplix is pretty durable and sticks well. I don't recommend ever drying the shells or AIO diapers because it will affect the aplix on these diapers and make them curl. The 2Step diapers also worked well for us overnight when Zeke hadn't had a massive amount to drink after dinner and I usually use them for when we are going out for the day because I know they can hold in what we need them to. 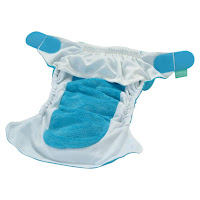 So enough about Ragababe, I still stick around the Ragababe pages just in case something appears that I might want to get but right now my prey has changed. I have a favorite diaper. It is the main part of my stash, its the first diaper I reach for, my husband reaches for, the diaper I use in the diaper bag, its my "I love you forever" diaper...the Totsbots easyfit. Right, so everyone has heard of this diaper, a lot of people have probably used these diapers and/or own a bunch themselves but this past March Totsbots made an announcement that they were releasing new prints and new materials for their diapers! WHOA!! I was so excited. The new versions have a super soft minky interior which my son loves against his bottom. Its dry's so fast and when line drying it doesn't get all crunchy and hard like the bamboo version does. I can simply take it off the line, fold/stuff it and put it away. With the old version I would need to 'fluff' the diapers before folding and putting away because they get so stiff. I stay they hold about the same amount of pee as the other version but they clean off much nicer because poo doesn't stick to the minky like it does to the bamboo. I was lucky enough to be asked by Bummis to try out the new version and review it for them and fell in love all over again with the Easyfit diapers. I now have 2 in my posession (red and orange) and have 3 more on the way. Of the three I am waiting on are 2 of them are the snap version of the diaper which I am really nervous about but willing to try out, and they are both prints (Three Little Pigs and Jack and the Bean Stalk and the Tunip one). But they are not what I am really hunting for. They just happened to be something that crossed my path at the right time.

What I want really bad, the diaper I refer to as my 'unicorn' diaper (my dream diaper), is the Chicken Little easyfit in aplix. I want it so bad and look everywhere for it new or used and can't find it. If you are not to familiar with TotsBots you might not know that they are a European company and so their have to make then ship their diapers over to Canada to Bummis who is their North American supplier. The shipment of diapers that they sent over took way longer to arrive then they had though so instead of end of April for sales to start it was more like end of May but they were also shorted a lot on the diapers and so hardly any retailers have even gotten the aplix ones to sell (at least the prints anyways). You can find the solid colors in aplix or snaps and you can at some stores find the snapped prints but that doesn't do me any good. So for now I am on the hunt (with the help of some great friends) looking for the diaper pictured below. I was really hoping to get it before this baby arrives into the world but its looking like that will not be happening. What I am hearing is that the prints in aplix will not really be available now until July! YIKES! 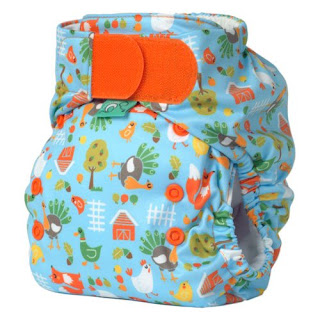 So if you happen to see this diaper in stock somewhere let me know! (kristina{at}clothdiaperaddiction{dot}com)

What diapers do you hunt for? What is your 'unicorn' diaper, the one you are dying to have but just can't seem to get your hands on? I would love to know about your hunt! (and hearing other peoples items might make me feel a little less crazy. (: )

I have been looking everywhere for those tots bots print diapers in hook and loop! The one I want most is Jack and the Beanstock. I have one print in hook and loop (the enormous turnip) and one in snaps, and I have to say I am not thrilled with their snaps. I like the BumGenius snaps, but these, not so much. I bought mine at cozybums.ca, but she only got a few hook and loop in stock, and they are almost all gone. Other places I checked with ordered them and didn't get any!

Thanks Tricia! I will keep an eye out there! Thanks!

Opulent Monsters are my unicorn. :-( Hard to get ahold of when only 16 are put up online at a time and there's 100 people on the website with their friends helping load their carts!

So bizarre to hear how hard to get Tots Bots are in N. America (Canada?). They are sold in one of the major supermarkets here (Tesco) and I literally live 15 mins away from the Tots Bots headquarters in Glasgow. But they do come with a hefty price tag, £16.99...eep!

I have tot bots snap diapers including chicken little. I'm not that impressed. My son is 16 lb and 28 inches and I already have the rise unsnapped all the way. Now OM is a different story. I have one and its my fave.