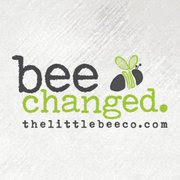 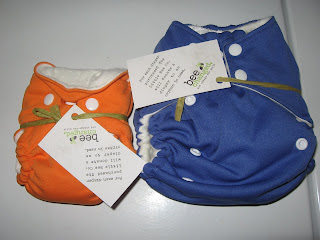 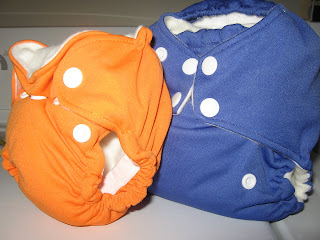 I contacted The Little Bee Co. for a review and was allowed the opportunity. But I didn't want to wait to get the review diaper so I purchased one too! I bought the orange (Mexican Sol) newborn diaper because I was going to be getting the OS diaper to review and wanted to show off both of their items. 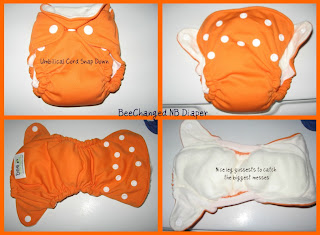 The Newborn diaper fits babies up to 12 pounds. It features a snap down for the umbilical cord. It also has really neat gussets for helping with the newborn blow outs. I haven't tried this diaper out yet because no newborn here yet. 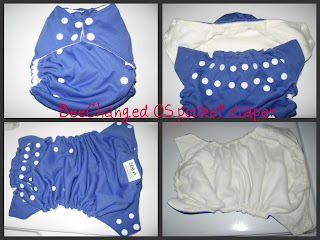 On to the OS diaper. They offer two kids of OS diapers. There is the microsuede pocket diaper and the bamboo pocket diaper. Both are built the same way but just have a different material on the inside. I reviewed the bamboo pocket diaper. It feautres cross over snaps, and a double row of snaps across the waist. There is also nice snug elastic across the front of the diaper and the back where the pocket opening is. There are three snaps for the adjustable rise making this a OS diaper. The leg elastic is also nice and tight. 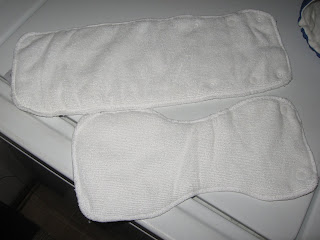 The OS pocket diaper comes with two inserts. A OS diaper that has snaps and can fold down and a small diaper that can snap onto the large insert for extra absorbancy if needed. The inserts are made of microfiber.

I was so excited to get this diaper on my son and I was going to be brave and try it out for the first time as a night time diaper. I had the diaper set to the middle rise so I folded the large insert down to the middle size and attached the small insert to that. Stuffed it into the pocket of the diaper and we were ready to go! On to my son the diaper went...and it didn't go great. I was so bummed. It was so huge in the front it looked like he was being smashed if you know what I mean. I put him down and he walked like he just got off a 3 hour ride on a horse. I wanted the diaper to work so I took it off him, put on his normal night time diaper and decided to try the diaper just during the day. 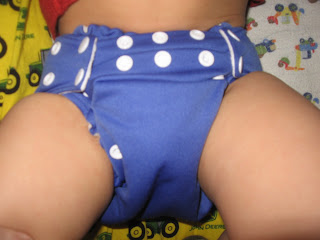 During the day I used just the large insert with it opened all the way. I stuffed the diaper and put it on my son. It fit so much better and I could tell he was so much more comfortable in it. It is a nice trim diaper and I love the color. I have it on the middle rise setting for him and you can tell by the above picture where the waist snaps are set so plenty or room for growing. 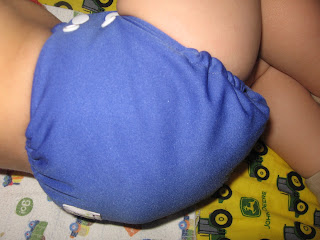 The Little Bee Co. has an amazing mission that I am so happy to support. Here is a little about their mission:

Our "bee changed and change the world" mission is our core: 'For each diaper purchased The Little Bee Co. will donate a diaper to an orphan in need'. Along with providing a quality diaper, our passion is to help children in need and bring an awareness to the orphan crisis consuming the world today.

Great company, great review. Thanks for the chance.

Cloth diapers are the best stuff to make your baby feel good even after wet surroundings.

Thanks a bunch!!
Jessi G.