We all know that horrible nasty smell that diapers get after being used A LOT. They get a build up detergents bacteria and more. I seriously wanted to either barf or pass out in the mornings when I changed my son's diaper. It smelled so bad (we had 4 diapers that where used only for night time purposes). We had tried all different ways of stripping our diapers and have had some pretty good success but I found myself having to strip them a lot more than I really should have been. Plus, the smell kept coming back! I don't know if there will ever be a way to get a diaper immaculately clean and have it stay that way wash after wash but I found something for me that has done wonders to my diapers.

Allow me to introduce you to RLR Laundry Treatment. 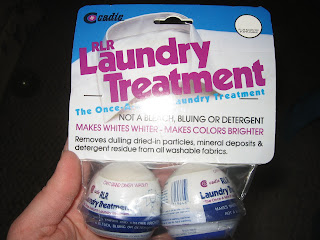 This is not a detergent but a treatment. Here is what the Nappy Shoppe has to share about RLR:

"RLR Laundry Treatment is a laundry additive that enhances fabric quality. It is not a soap, bleach, bluing agent, or detergent. It can be used on both white and colored fabrics without harm. RLR contains no phosphates or perfumes and is a biodegradable product. RLR added to the wash removes all the residue trapped within the fabric and suspends it in the water. The unwanted particles are prevented from being redeposited and are washed away in the rinse cycle. RLR was made with the intention of being used once a month to help clothing appear vibrant and clean."

I was pretty excited to have the opportunity to work with the Nappy Shoppe in reviewing the RLR and putting it to the test on my diapers. Here is a quick look at the product:

You can get RLR in a '2 pill pack', a canister (equal to 11 loads) or a pouch( 1 load). I received the 2 pill pack. The come in a simple little canister like you would get out of a quarter machine. They are wrapped tightly in a plastic wrap so they wont pop open. The powder had a dingy tint to it, it almost looked like sand from the beach but no where near as grainy. 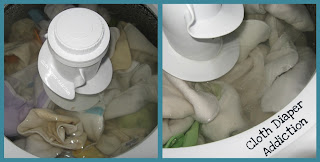 I did a good rinse on my diapers in cold water to get out any yuck that was in them. I even threw in as many clean diapers as I could while still having some left over to use on my baby. After the rinse I filled the tub up with HOT water and added the RLR treatment. I let it agitate for a couple of minutes and then stopped it to let it sit and soak. The picture above shows the dingy water...gross, especially since most of those diapers were CLEAN to begin with. 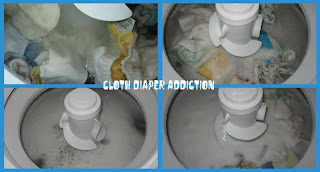 Here is a progression of agitation. The top left is about 5 minutes into the wash, then top right is about 7 minutes, bottom left is about 9 minutes and bottom right is about 11 minutes. Depending on how much build up you have on/in your diaper will affect how soapy and sudsy your water will become. I have seen some diapers with so much build up in them that the owner has had to stop the wash cycle to scoop out suds into a 5 gallon bucket to prevent their machine from overflowing! Luckily mine were not that bad. 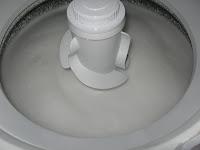 The above picture is the last one I took of the wash with RLR. There was quite a bit of suds. Hard to believe there was that much build up in my diapers! 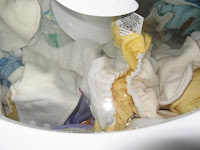 After the wash was done the diapers did look a lot brighter and cleaner. 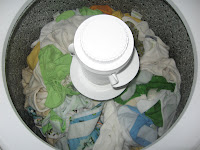 My thoughts on RLR Laundry Treatment:
AMAZING! Are you satisfied with my response or do you want more? I had heard a good amount of times about RLR and people liking to use it on their diapers but I could never find it. They say you can get it at your local grocery store like Walmart but I 1) don't like Walmart and 2) wouldn't be able to find it in my Walmart even if I tried and they did happen to carry it. So I looked around online and found quite a few different placed that carry it. I contacted The Nappy Shoppe to see if they would want to do a review and giveaway and they did! So anyways, I am so thrilled I was able to test out the RLR. It did wonders to my stinky diapers. They don't stink anymore. I will be making purchases of RLR when ever my diapers start to stink. I have gone at least 2 months now with out my diapers getting stinky. They also look a lot brighter and not as dingy. AND the best part of all is that this stuff is so cheap! Its only $3.35 for a 2 pack which will last you a long time. You can do it once a month to keep your diapers from getting build up or you can do it as needed (as I do). I really recommend checking out RLR if you are having some problems with stink.
Posted by Kristina at 8:30 AM

Thanks for this review and giveaway!

I NEED this. I'm trying to figure out an ammonia issue in my 6 month old's prefolds and since I'm new to microfiber I'm working on some stink issues in my 3 y.o. night time FB.

Kristina, do you know if this would work in a front loader? Thanks.

YES I have seen some different blog posts where people have done the RLR in front loaders. One lady had extremely high amounts of suds and had to open her machine after the water drained and scoop out a 5 gallon bucket of suds then start the machine back up. If you do a google search you can probably find a post on it!

This will be good to keep in mind if I encounter a stink problem.

So does this work on Ammonia build up as well? Some of my son's diapers have so much buildup that it burns my nose when I take off his diaper - and isn't very comfortable for his bum either (we don't use them very often anymore). Thanks for the tip!

Thanks for the giveaway! :)

Interesting...I wonder what's in RLR. Any brighteners? And is it HE compatible?

it is completely CD safe and it can be used in a HE machine.

I know I'm a little late to the party but I just started with the RLR yesterday in my front loader and I'm having some major suds issues. I added about 1/2 the pouch to 14 diapers and after rinsing 6-8 times with the max water I can get into my HE washing machine there are still traces of suds in the wash water! How many times am I supposed to rinse the diapers?!? It's starting to drive me nuts and, since this is only 1/3 of my stash that I'm going to treat, I'm starting to get concerned about my water bill!! Any advice would be appreciated! I'm starting to get desperate!

I know this is an old post but found it in my google research. Did the RLR affect any of your PUL? I read on another page that diapers with PUL aren't recommended to be soaked....I'm just learning about it a bit.

I love rlr laundry treatment- I thought I was going to have to get rid of my son's prefolds due to smell, but this stuff has really stripped the smell and made them a lot fluffier. Cute blog!